Ecclesiology in the New Testament - eBook
By: E. Elizabeth Johnson 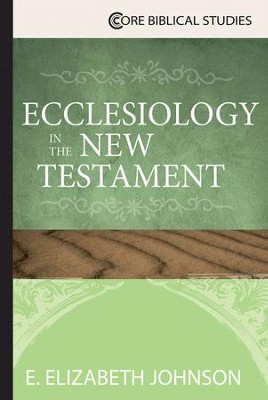 Ecclesiology in the New Testament - eBook

By: E. Elizabeth Johnson
More in Core Biblical Studies Series
Abingdon Press / 2020 / ePub
Write a Review
This product will be released on 03/17/20
Email me when this product is available.
Stock No: WW93313EB

▼▲
The earliest Christians thought of themselves in communal terms. They did not simply make individual commitments to Jesus as God's messiah; they constituted themselves as communities shaped by the in-breaking of God's realm. They likely learned to do so from Jesus himself. When he summoned an inner circle of his followers and numbered them twelve, he signaled that his ministry had the character of a reform movement within Israel.

In his work of preaching, healing, exorcism, and prophetic sign actions, Jesus shaped his followers into what would eventually become the church. By transgressing contemporary religious and social boundaries in his ministry, he planted the seeds of the church's later inclusion of non-Jews.

This book will investigate New Testament texts about the church from a comparative standpoint. That is, the various authors adopt different metaphors for their communities-family, assembly, nation, priesthood, and so on--to make varying claims about how they ought to live together and how they ought to live among their neighbors. In their descriptions of themselves as the church, Christians implicitly and explicitly describe their theology but also the Roman empire, the Jerusalem temple, the synagogue, popular philosophical circles, and first-century domestic order.

Dr. Johnson is interested in the ways the church uses the Bible to think about faith and life. She is drawn to exploring how the Pauline letters invite us to reflect about who God is and what Jesus’ death and resurrection mean for human life and society.
She has also published a number of articles on the New Testament related to families and family values.

▼▲
I'm the author/artist and I want to review Ecclesiology in the New Testament - eBook.
Back
×
Back
×