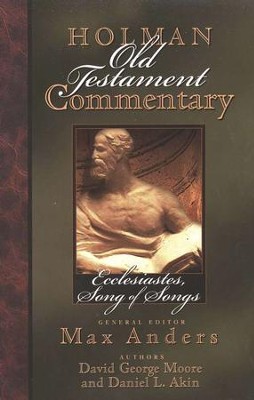 ▼▲
Solomon, tenth son of David and third king of Israel, had a reputation for great wisdom. His name is associated with many of the Proverbs, and he is considered to be the author of Ecclesiastes and the Song of Songs. Duane Garrett has characterized Ecclesiastes as the Bible's "resident alien." Many people even wonder why Ecclesiastes is a part of the Bible. Well-known writes have weighed in with praise for Ecclesiastes. Herman Melville said "the truest of all books is Solomon's and Ecclesiastes is the fine hammered steel of woe." Thomas Wolfe believes that "Ecclesiastes is the greatest single piece of writing I have ever known and the wisdom expressed in it the most lasting and profound." Most remarkable may be the comments of R.C. Sproul. He says that Ecclesiastes has a fond place in his heart because it was mightily used in his conversion to Christ--the second half of Ecclesiastes 11:3, Whether a tree falls to the south or to the north, in the place where it falls, there will it lie. Hearing this verse, Sproul saw himself "lying on the floor of the forest having fallen...and rotting and disintegrating." Song of Songs is a love song that clearly celebrates the joy of physical, intimate love within marriage. One of the book's distinctive messages is that sex is God's gift, his good gift, and that it should be enjoyed. The Song boldly proclaims the value and beauty of love and devotion between a man and women. The Song of Solomon has a message that all married couples need to hear. It also has a helpful word for those anticipating marriage. The beauty of its language and thoughts=elevate the sexual and physical relationship to a much higher level that does the world. Sexual feelings are accepted and affirmed. They are a part of God's plan for His people.

▼▲
David Moore is founder and president of Two Cities Ministries and holds degrees with honors from Dallas Theological Seminary and Trinity Evangelical Divinity School. The author of The Last Men's Book You'll Ever Need: What the Bible Says about Guy Stuff, he speaks around the world and has led chapel services for several Major League Baseball and National Football League teams. Moore lives with his wife and sons in Austin, Texas.
Daniel L. Akin is the president of Southeastern Baptist Theological Seminary in Wake Forest, North Carolina. He holds a Ph.D. in Humanities from the University of Texas at Arlington and has authored or edited many books and Bible commentaries including Ten Who Changed the World and the Christ-Centered Exposition Commentary volumes on Mark and 1, 2, 3 John.

▼▲
I'm the author/artist and I want to review Ecclesiastes & Song of Solomon: Holman Old Testament Commentary [HOTC].
Back
Back