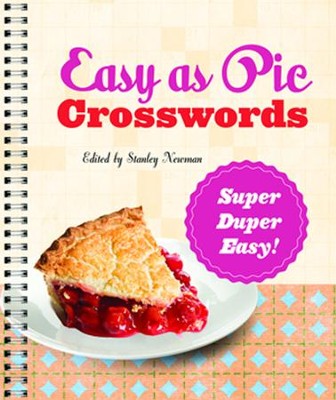 ▼▲
Stop the presses: here's where you'll find super puzzles that are also super-duper simple! With every crossword as easy as the one in Monday's paper, even beginners can have fun solving seven days a week.

▼▲
Stanley Newman, crossword editor for the Long Island newspaper Newsday, is syndicated worldwide to more than 100 daily, Sunday, and Internet newspapers. His puzzles have appeared regularly in Prevention, People, Sport, and BusinessWeek magazines. Newman has written or edited more than 125 books and organized and conducted many puzzle and trivia events in the United States, including four seminars at the Smithsonian Institution and, in 2007, the first crossword tournament ever held at Yale University. He lives in New York with his wife and has three grown children.

▼▲
I'm the author/artist and I want to review Easy as Pie Crosswords: Super-Duper Easy!.
Back
×