Skip to main content
My Easter Basket: And the True Story of Easter
By: Mary Manz Simon
Illustrated By: Angelika Scudamore
Stock No: WW689901 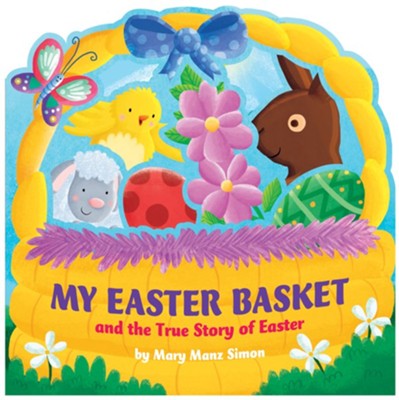 My Easter Basket: And the True Story of Easter

▼▲
Teach your little ones the true story of Easter with My Easter Basket by Mary Manz Simon. Easter is about much more than yellow chicks and white bunnies. Use the colors in this special basket to discover the real meaning of this special day. Little readers can walk through the Bible story and learn why we celebrate Easter---because Jesus is alive! Recommended for ages 0 to 4 years/

▼▲
Look in my basket to see what Easter is all about!
Easter is about much more than yellow chicks and white bunnies. Young children can use the colors in this basket to discover the real meaning of this special day. As they walk through the Bible story, they will learn why we celebrate Easter—because Jesus is alive!

▼▲
Dr. Mary Manz Simon, who earned a doctorate in education, is an award-winning author with more than 3 million books sold. A thought leader in the Christian children’s market, she has worked with entertainment entities, periodicals, and major publishers including Walden Media, Sony Home Entertainment, DreamWorks Animation, and American Girl. Dr. Simon has appeared on hundreds of radio and television programs in support of her products and as a practical parenting specialist. She and her husband, Hank, a pastor, celebrated their fortieth anniversary in 2014. They are the parents of three and have four grandsons.

▼▲
I'm the author/artist and I want to review My Easter Basket: And the True Story of Easter.
Back
×
Back
×