Skip to main content
SPRING CYBER SALE: The sale you've been waiting for! Up to 85% off through 5/25>
Lords of the Earth: An Incredible but True Story from the Stone-Age Hell of Papua's Jungle
By: Don Richardson
Stock No: WW215605 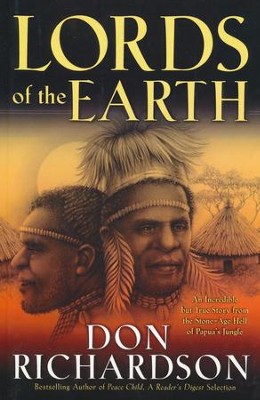 Lords of the Earth: An Incredible but True Story from the Stone-Age Hell of Papua's Jungle

From the author of Peace Child, Don Richardson, comes Lords of the Earth, an unforgettable story of missionary tenacity and zeal that sold over 100,000 copies in the hardcover edition.Engulfed in the darkness of Irian Jaya's Snow Mountains live the Yali-naked cannibals who call themselves "lords of the earth." Yet in terror and bondage they serve women-hating, child-despising gods. Missionary Stan Dale dared to enter their domain.This book is the story of Dale, his wife, his companions, and thousands of Yali tribesmen-all swept together in a maelstrom of agony and blood that climaxes in a dramatic, unexpected ending.

▼▲
Engulfed in the darkness of Irian Jaya's Snow Mountains live the Yali, naked cannibals who call themselves lords of the earth. Yet, in spite of their boldness, they live in terror and bondage to the women-hating, child-despising gods they serve. Missionary Stan Dale dared to enter their domain and be an instrument to change their future. Peace Child author, Don Richardson, tells the story of Dale, his wife, his companions, and thousands of Yali tribesmen in Lords of the Earth. This unforgettable tale of faithful determination and zeal against overwhelming odds brings unlikely characters together in a swirl of agony and bloodshed climaxing in a dramatic, unexpected ending. Readers will find their perceptions of how God moves enlarged and inspired by this classic story. For parents and youth leaders looking for real-life role models for the new generation of young people, you will want to meet the Dales in Lords of the Earth.

▼▲
I'm the author/artist and I want to review Lords of the Earth: An Incredible but True Story from the Stone-Age Hell of Papua's Jungle.
Back
Back