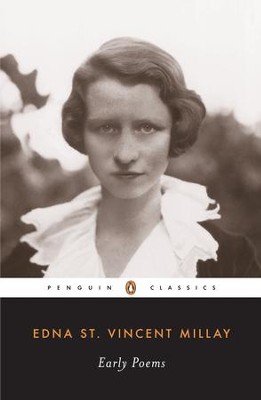 Millay's first three books of lyrics and sonnets are collected here: Renascence, Second April, and A Few Figs from Thistles. With a balanced and appreciative introduction and useful annotations, this volume presents some of the Pulitzer Prize-winning poet's best work in which she weaves intellect, emotion, and irony.

▼▲
Edna St. Vincent Millay was born in 1892 in Rockland, Maine, and grew up in the seaside town of Camden. She published her first poems as a teenager and, at twenty, her long poem "Renascence" appeared in the anthology The Lyric Year. At Vassar, she developed her talents and reputation as a dramatist and actor. After graduating in 1917, Millay moved to Greenwich Village in New York City where she gave poetry readings and became known for her freedom of thought and feminist views. Her poetry was published in several magazines, including Vanity Fair, Poetry, and Forum. Her first book, Renascence and Other Poems (1917), was followed in 1920 by A Few Figs from Thistles (an expanded edition appeared in 1922) and in 1921 by Second April.

In 1923, upon her return from two years of writing and traveling in Europe, Millay received the second annual Pulitzer Prize for Poetry and published a new collection, The Harp-Weaver and Other Poems. Millay published five more collections of poetry: The Buck in the Snow (1928), Fatal Interview (1931), Wine from These Grapes (1934), Huntsman, What Quarry? (1939), Make Bright the Arrows (1940); a prose collection under her pen name, Nancy Boyd, titled Distressing Dialogues (1924; its foreword carried Millay’s byline); a translation, with George Dillon, of Baudelaire’s Flowers of Evil (1936); the verse dramas Conversation at Midnight (1937) and The Murder of Lidice (1942); and several plays. Her final book was the posthumously published Mine the Harvest (1954), edited by her younger sister Norma. Edna St. Vincent Millay died in 1950.

Holly Peppe, who holds a master of arts in teaching from Brown University and a Ph.D. in English from the University of New Hampshire, is a former professor and director of the English department at the American College of Rome and a National Endowment for the Humanities scholar. Dr. Peppe—whose doctoral dissertation focuses on Millay’s critical reception and sonnet sequences, and who often lectures on Millay—has served as president of the Edna St. Vincent Millay Society since 1987. The Society is responsible for the preservation of Steepletop, the poet’s home (designated a National Public Landmark) in Austerlitz, New York, and the placement of the poet’s archives and family papers. Dr. Peppe is also involved with the Millay Colony for the Arts, an artists’ retreat at Steepletop founded in 1973 by Norma Millay. Dr. Peppe’s own poetry, translations, articles, and essays have appeared in numerous books and periodicals. She lives in New York City.

▼▲
I'm the author/artist and I want to review Early Poems - eBook.
Back
×
Back
×