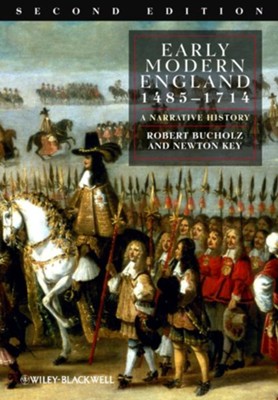 ▼▲
The second edition of this bestselling narrative history has been revised and expanded to reflect recent scholarship. The book traces the transformation of England during the Tudor-Stuart period, from feudal European state to a constitutional monarchy and the wealthiest and most powerful nation on Earth.

Click here for more discussion and debate on the authors’ blogspot:
http://earlymodernengland.blogspot.com/

[Wiley disclaims all responsibility and liability for the content of any third-party websites that can be linked to from this website. Users assume sole responsibility for accessing third-party websites and the use of any content appearing on such websites.  Any views expressed in such websites are the views of the authors of the content appearing on those websites and not the views of Wiley or its affiliates, nor do they in any way represent an endorsement by Wiley or its affiliates.]

▼▲
Robert Bucholz is Professor of History at Loyola University of Chicago. He is the author of The Augustan Court: Queen Anne and the Decline of Court Culture (1993) and, with Sir John Sainty, Officials of the Royal Household 1660–1837 (2 volumes, 1997–8). He has written articles on Queen Anne and the court.


Newton Key is Professor of History at Eastern Illinois University. He has written articles on preaching, on feasting, on charity, and on provincial and metropolitan politicking in Stuart England and Wales. He is currently at work on a study of patrician/plebeian politics in seventeenth- and eighteenth-century London.

▼▲
“Scholars and students who want to begin to master early modern England need look no further. Bucholz and Key’s book is the text to study and know. It is difficult to convey how useful this text is—from its concise prose to its useful charts and graphs to its glossary and select bibliography, Bucholz and Key have done an admirable job.” (Scholars’ Book Talk, March 2009)

"This excellent book is consciously designed for students in North American universities who are studying this period for the first time, but its qualities are such that British students will find it a remarkably effective and well-sustained synthesis. The narrative is readable, fluent and balanced ... Throughout, the authors, both of whom are vastly experienced teachers as well as being active research scholars, have managed to delineate detail effectively without obscuring the narrative flow ... It is, as they say in their conclusion, 'a terrific story', and they have told it terrifically well." (History)

"Complementing its accessibility, Early Modern England is comprehensive and true to recent scholarly conclusions. Bucholz and Key have produced a useful narrative for the present generation of those being introduced to English history in the period. It is engaging from first to last and merits close review by faculty across the United States seeking a strong classroom text." (Albion)

"Robert Bucholz and Newton Key have written Early Modern England, 1485-1714: A Narrative History to fill the need for an authoritative, one volume textbook covering the Tudor and Stuart eras that is written especially for an American audience. They have succeeded in their goal." (H-Albion)

"Early Modern England is informative and a pleasure to read." (Sixteenth Century Journal)