Skip to main content
MOTHER'S DAY SALE: Books, Bibles, and more at no-nonsense prices through April 20th. >
The World of Jesus and the Early Church: Identity and Interpretation in the Early Communities of Faith
Edited By: Craig A. Evans
By: Edited by Craig A. Evans
Stock No: WW568257 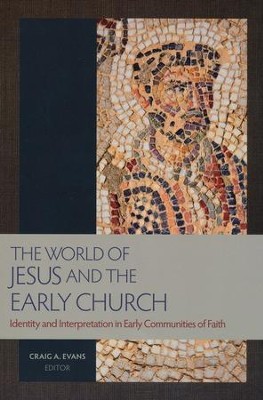 The World of Jesus and the Early Church: Identity and Interpretation in the Early Communities of Faith

▼▲
How do religious texts impact the way communities of faith understand themselves? In The World of Jesus and the Early Church: Identity and Interpretation in Early Communities of Faith Craig Evans leads an interdisciplinary team of scholars to discover and explain how the dynamic relationship between text and community enabled ancient Christian and Jewish communities to define themselves. To this end, scholars composed two sets of essays. The first examines how communities understood and defined themselves, and the second looks at how sacred texts informed communities about their own self-understanding and identity in earliest stages of Christianity and late Second Temple Judaism.

Whether revealing new understandings of Jesus before Pilate, the rituals governing the execution and burial of criminals, or the problems of dating ancient manuscripts, The World of Jesus and the Early Church draws the reader into the world of the early Christian and Jewish communities in fresh and insightful ways.

Prominent scholars in the fields of Archaeology, New Testament Studies, and the Dead Sea Scrolls have come together in The World of Jesus and the Early Church to focus on early Jewish and Christian communities of faith and their impact on the collections of texts that were their scriptures (and would become, in due time, part of their various canons).

Professors, students, and pastors who are interested in how these communities lived--how they developed, what they believed, and how they regarded and preserved the written documents that were their scripture--will be interested in this comprehensive volume drawn from presentations made to key conferences on the subject. This book's emphasis on a variety of communities of faith (not just Christian) and their early (and critical) influence on the development of religious canonical materials sets it apart from others on New Testament-period culture.

▼▲
Craig A. Evans, PhD, is Payzant Distinguished Professor of New Testament at Acadia Divinity College, Wolfville, Nova Scotia, Canada. He is a frequent contributor to scholarly journals and the author or editor of numerous publications.

▼▲
"After Evans's six-page introduction, this volume presents seven essays on identity in Jewish and Christian communities of faith: J. J. Collins on the site of Qumran and the sectarian communities in the Dead Sea scrolls; T. Elgvin on from the earthly to the heavenly temple--lines from the Bible and Qumran to Hebrews and Revelation; D. M. Peters on the scrolls and the Scriptures on the margins--remembered in canons or forgotten in caves; M. A. Chancey on disputed issues in the study of cities, villages, and the economy in Jesus' Galilee; M. Y. MacDonald on children in house churches in light of new research on families in the Roman world; Evans on the family buried together stays together--on the burial of the executed in family tombs; and S. Gibson on the trial of Jesus at the Jerusalem praetorium--new archaeological evidence. Then there are six papers on interpreting the Scriptures in Jewish and Christian communities: G. 1. Brooke on the Dead Sea scrolls and the interpretation of Scripture; K. Bodner on excavating ideas- the Qumran scrolls of Samuel; S. J. Andrews on the oldest attested Hebrew Scriptures and the Khirbet Qeiyafa inscription; J. A. Sanders on Biblia Hebraica Quinta; L. Hurtado on what the earliest Christian manuscripts tell us about their readers; and P. Foster on bold claims, wishfhl thinking, and lessons about dating manuscripts from Papyrus Egerton 2."
--New Testament Abstracts

"This volume explores recent understanding of the way in which the early Jewish and Christian communities of faith functioned and how they defined themselves, as well as how they interpreted their scriptures. The collected essays encompass archaeological, sociological, economic, ritual, and textual discoveries; shed light on these communities of faith; and draw out implications for both the academy and the church today. John Collins, Margaret Y. MacDonald, Larry Hurtado, and James A. Sanders are among the 13 contributors."
--Interpretation

▼▲
I'm the author/artist and I want to review The World of Jesus and the Early Church: Identity and Interpretation in the Early Communities of Faith.
Back
×
Back
×