Skip to main content
BRING CHRISTMAS HOME SALE: Save up to 85% through 11/2 >
Dynamics of Muslim Worlds: Regional, Theological, and Missiological Perspectives
By: Evelyne Reisacher
Stock No: WW851010 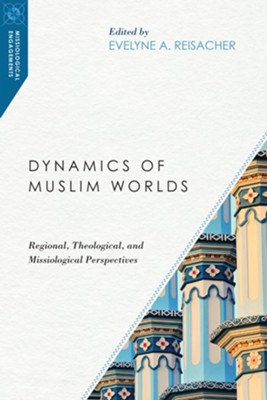 Christians in the West have many questions about the identity of Islam and Muslim societies. Due in part to misleading media reports and a lack of interreligious dialogue, a majority of Western Christians view Islam as more prone to violence. The perplexity is compounded by news of violent conflicts involving Muslim communities in various parts of the world. Discussions about Muslims in the media often give the impression that Islam is a single, uniform entity.

The reality is that global Islam is a complex and diverse phenomenon, not a monolithic one. Unfortunately, what makes the headlines often shapes Christian mission strategies, which are overshadowed, if not controlled, by such reports. The challenge for understanding Islam is further complicated by the fact that an already very diverse Islam across the world stage is fluid and dynamic, with changes motivated as much by Islamic agency from within as by forces impinging from without.

Dynamics of Muslim Worlds brings together leading missiologists, theologians, and historians from the 2016 Missiology Lectures at Fuller Theological Seminary's School of Intercultural Studies to present a nuanced account of contemporary Muslim societies. Edited by Evelyne Reisacher, the contributions to this Missiological Engagements volume explore the changing dynamics of Islam today and how current religious and social climates shape Christian engagement with Muslims. This is a fresh look at a topic of increasing importance in our present global context.

Evelyne A. Reisacher (PhD, Fuller Theological Seminary) is associate professor of Islamic studies and intercultural relations at Fuller Theological Seminary. For twenty years, she worked at a French organization called L’Ami, facilitating the relationship between churches and North African immigrants and developing courses, teaching tools, and seminars for sharing the gospel cross-culturally. She has trained Christian leaders and church members in Europe, North Africa, the Middle East, and South East Asia.

Reisacher has published several articles on gender issues in Islam and Muslim-Christian relations. She is the general editor of Toward Respectful Understanding and Witness among Muslims: Festschrift in Honor of J. Dudley Woodberry, and the associate editor of From the Straight Path to the Narrow Way: Journeys of Faith. Additionally, she has published chapters in the books Peace-Building By, Between, and Beyond Muslims and Evangelical Christians and A Worldview Approach to Ministry among Muslim Women.

▼▲
I'm the author/artist and I want to review Dynamics of Muslim Worlds: Regional, Theological, and Missiological Perspectives.
Back
Back