Duel Between the First Ironclads - eBook
By: William C. Davis 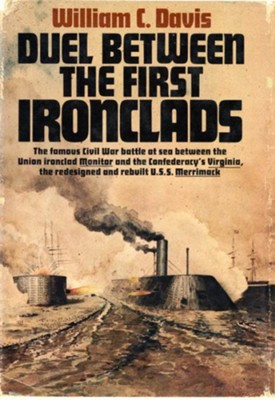 Duel Between the First Ironclads - eBook

▼▲
One was called "a tin can on a shingle"; the other, "a half-submerged crocodile."

Yet, on a March day in 1862 in Hampton Roads, Virginia, after a five-hour duel, the U.S.S. Monitor and the C.S.S. Virginia (formerly the U.S.S. Merrimack) were to change the course of not only the Civil War but also naval warfare forever. Using letters, diaries, and memoirs of men who lived through the epic battle of the Monitor and the Merrimack and of those who witnessed it from afar, William C. Davis documents and analyzes this famous confrontation of the first two modern warships. The result is a full-scale history that is as exciting as a novel. Besides a thorough discussion of the designs of each ship, Davis portrays come of the men involved in the building and operation of America's first ironclads-John Ericsson, supreme egoist and engineering genius who designed the Monitor; John Brooke, designer of the Virginia; John Worden, the well-loved captain of the Monitor; Captain Franklin Buchanan of the Virginia; and a host of other men on both Union and Confederate sides whose contributions make this history as much a story of men as of ships and war.

▼▲
William C. Davis was the managing editor of the Civil War Times Illustrated. He is the author of Breckinridge: Statesman, Soldier, Symbol; The Battle of New Market; and Duel Between the First Ironclads. His books on the Civil War have received critical and popular acclaim and were chosen by the Military Book Club, proving him to be one of the most noteworthy historians and Civil War experts today.

▼▲
I'm the author/artist and I want to review Duel Between the First Ironclads - eBook.
Back
×
Back
×