Skip to main content
OUR BIGGEST BARGAIN SALE EVER: Over 6,000 deals at never-seen-before prices ~ through 8/23. Shop now >
As Fast As Her: Dream Big, Break Barriers, Achieve Success - eBook
By: Kendall Coyne, Estelle Laure
Stock No: WW117456EB 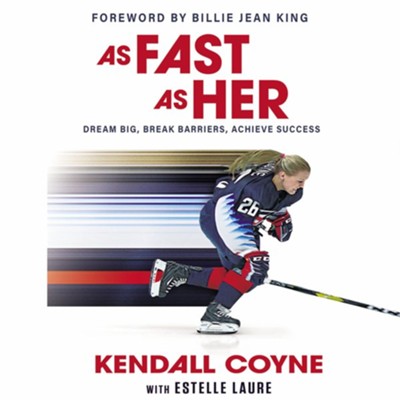 The world told Kendall Coyne to slow down. They said "not so fast" when she picked up hockey skates instead of figure skates. They said "just a minute" when she tried out for the boy's team. They told her "you're not enough" so often that she started to believe it. But Kendall had a passion and a dream, so instead of slowing down, she sped up, going on to win Olympic gold and a spot in the Fastest Skater Competition at the 2019 NHL All-Star Weekend.

As Fast as Her explores how Kendall held on to her dream, overcame her insecurities, defied her naysayers, and pushed herself past barriers to achieve her goals—and how you can too! Inside this inspirational, sports-meets-real-life inspirational autobiography, Kendall shares:

Kendall pauses throughout her story to equip you with practical take-aways from her journey to become a top athlete and Olympic medalist, appropriately dubbed "Golden Coynes." As Fast As Her also includes behind-the-scenes and personal photos in a full-color, 8-page insert.

As Fast as Her is perfect for:

Estelle Laure believes in love and magic and the power of facing hard truths. She has an MFA in Writing for Children and Young Adults from Vermont College of Fine Arts and thinks everyone should have to wait tables or work in a kitchen at least once in their lives. She lives in Taos, New Mexico, with her family.

▼▲
What Kendall Coyne is doing for the sport is not just about her--it's not even just about her team. She is changing people's perspectives about what a woman can accomplish. In As Fast As Her, she shares her mission of empowerment, showing all readers how they can open the door to whatever they love and confidently walk through. -- Manon Rhéaume, the first woman to play in the NHL, Olympic medalist, and speaker

I met Kendall when she was seven years old, when she first had a dream to play hockey in the Olympics. It was a thrill to watch her grow into an elite athlete and achieve her dream of winning gold. On top of that, she shocked the sports world by proving she is as fast as the best men's players in the world. Kendall is an incredible leader, a huge advocate for the game, and the perfect role model for the younger generation. This is a must-read story. -- Cammi Granato, member of the Hockey Hall of Fame, Olympic medalist, and NHL pro scout

When I first met Kendall Coyne back when she was a young, excited fan, I had no idea what an amazing player and person she'd become. In the years since, I've been amazed by Kendall's focus on becoming the best she can be, her drive to make her mark on the sport and achieve her goals, and her dedication to helping young people grow and see the possibilities in themselves--including her fight to create a better future for women in hockey. Throughout As Fast As Her, as she shares the challenges and obstacles she's overcome in her career, Kendall offers a powerful message to any young person who is chasing their dream or working to make their voice heard: Don't let anyone tell you no, and fight for the respect you deserve with everything you have. In the end, I came away an even bigger fan of Kendall, and hope this book inspires a new generation to follow in her footsteps. -- Chris Chelios, three-time Stanley Cup Champion and member of the Hockey Hall of Fame

Kendall Coyne is one of the most impactful athletes ever to lace up a pair of skates. While she is best known for her explosive speed, what I admire most about her is her fierce determination, fearlessness, and work ethic. Not every athlete--no matter how gifted--possesses the mental toughness to show up on a big stage. In addition to showing up for Team USA on the international stage numerous times, Kendall's clutch performance at the 2019 NHL All-Star Skills Competition was a shining example of thriving under intense pressure. That lap was a barrier-shattering moment for the women's hockey world, and only someone like Kendall could have pulled it off. Every athlete and sports fan--no matter your age, gender, or favorite sport--will be able to enjoy and learn something from Kendall's story of overcoming obstacles, constantly pushing herself to greater heights, and rising to the occasion when called upon. -- Patrick Burke, Senior Director of Player Safety for the NHL

As Fast As Her is sure to inspire, as Kendall is a leader and role model both on and off the ice. As a professional, I have had the honor to work with her to create the 'Golden Coynes' program to welcome youth girls into our great game and help them keep playing. As a mom to my ten-year-old daughter, Amelia, I've seen the impact Kendall has made in helping her to set goals and dream BIG! -- Annie Camins, Chicago Blackhawks Senior Director, Youth Hockey

▼▲
I'm the author/artist and I want to review As Fast As Her: Dream Big, Break Barriers, Achieve Success - eBook.
Back
Back