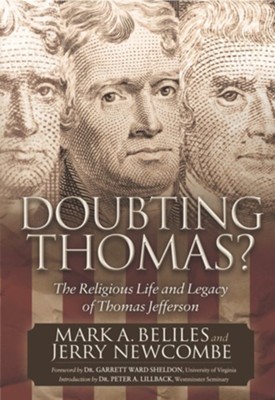 Doubting Thomas: The Religious Life and Legacy of Thomas Jefferson

▼▲
Thomas Jefferson and the founding fathers intended a strict separation of church and state, right? He would have been very upset to find out about a child praying in a public school or a government building used for religious purposes, correct? Actually, the history on this has been very distorted. While Jefferson may seem to be the Patron Saint of the ACLU, his words and actions showed that he would totally disagree with the idea of driving God out of the public square. Doubting Thomas documents that. . . * Jefferson said that our rights come from God. God-given rights are non-negotiables. * At the time that he wrote the Declaration of Independence and the Virginia Statute for Religious Freedom---major contributions to human and religious rights Jefferson served diligently as a vestryman (like an elder and a deacon rolled into one) for the Episcopal Church. * In 1777, he wrote up the charter for the Calvinistical Reformed Church in his town with an evangelical preacher, the Rev. Charles Clay--with whom he had a lifelong friendship. Jefferson was the biggest single contributor to this fledgling congregation. * Jefferson had nothing but the highest praise for Jesus teaching, which he studied religiously (even in the original Greek), in order to pattern his life after that which he called the most sublime and benevolent code of morals which has ever been offered to man. * As president, he attended church on a regular basis at the US Capitol building, even sometimes recommending preachers to fill that pulpit. * He had many positive relationships with orthodox clergymen and active lay Christians. * He actively supported Christian causes, financially, in ways that would put the average Christian to shame. * He set out to create a non-denominational college that accommodated Christian groups of different stripes. And on it goes. Historical revisionism has distorted the religious views of Thomas Jefferson, making him far more skeptical than he was. But there is no doubt that by the end of his life, he seemed to privately embrace Unitarian views of the Christian faith, while outwardly supporting and attending his local Trinitarian church. Thus, a legacy of Jefferson s has been taken out of context and used to squelch religious freedom in America. Ironically, religious freedom was one of Jefferson s core beliefs and contributions. But this is being turned on its head. Chiseled in stone at the Jefferson Memorial are his famous words: The God who gave us life gave us liberty. And can the liberties of a nation be thought secure when we have removed their only firm basis, a conviction in the minds of the people that these liberties are of the Gift of God? That they are not to be violated but with His wrath? Regardless of Jefferson s private religious views, he stood solidly against the state making theological decisions for its people. Therefore, he would stand solidly against the anti-Christian crusade being carried out in his name today. It s time to set the record straight."

▼▲
I'm the author/artist and I want to review Doubting Thomas: The Religious Life and Legacy of Thomas Jefferson.
Back
×