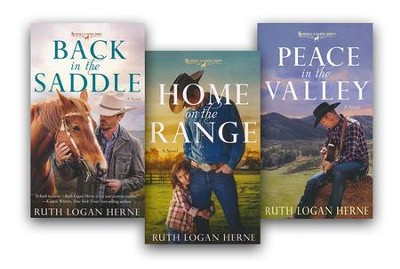 Back in the Saddle #1

Family and fortunes collide in this tale of a prodigal son’s return. Colt Stafford had left the West for Wall Street. When the stock market fails him, Colt comes home to his roots, where he’s unexpectedly greeted by a gun-toting woman named Angelina, an angry younger brother – Nick – and a town that resents the Stafford’s presence. Will Colt settle down and help mend the fences…or will he make tracks once again for Wall Street?

Home on the Range #2

Single dad, Nick Stafford stayed in central Washington to work on his family's ranch after his brothers left to pursue other passions.  He is determined to be better at everything his dad wasn't until his daughters start having trouble at school.  Dr. Elsa Andreas left her family therapy practice and retreated in the backwoods of Gray's Glen.  Her sister is the principal at the school where the Stafford girls attend.  She thinks it will help Elsa if she works with the girls.  What happens when Nick and Elsa's worlds colide?

Peace in the Valley #3

Trey will always feel indebted to his uncle for adopting him, though he left the Ranch to pursue a dream in the music industry. When his wife tragically dies, he struggles to sing love songs. Should he head back to the ranch to help his uncle?

▼▲
I'm the author/artist and I want to review Double S Ranch Series, Volumes 1-3.
Back
×