Skip to main content
Get Christmas Ready Sale: Deals on over 1,150 titles thru 9/27.
God's Double Agent: The True Story of a Chinese Christian's Fight for Freedom - eBook
By: Bob Fu, Nancy French
Stock No: WW40278EB 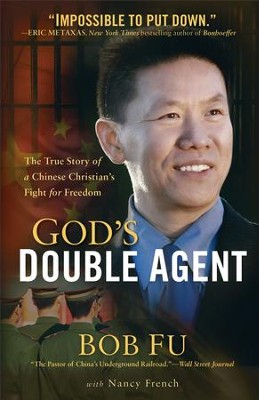 ▼▲
Tens of millions of Christians live in China today, many of them leading double lives or in hiding from a government that relentlessly persecutes them. Bob Fu, whom the Wall Street Journal called "The pastor of China's underground railroad," is fighting to protect his fellow believers from persecution, imprisonment, and even death. God's Double Agent is his fascinating and riveting story.

Bob Fu is indeed God's double agent. By day Fu worked as a full-time lecturer in a communist school; by night he pastored a house church and led an underground Bible school. This can't-put-it-down book chronicles Fu's conversion to Christianity, his arrest and imprisonment for starting an illegal house church, his harrowing escape, and his subsequent rise to prominence in the United States as an advocate for his brethren. God's Double Agent will inspire readers even as it challenges them to boldly proclaim and live out their faith in a world that is at times indifferent, and at other times murderously hostile, to those who spread the gospel.

▼▲
Bob Fu is a former dissident and pastor of an illegal underground church in China. As a former prisoner, Fu has unique insight into the plight of Chinese Christians and an unparalleled network on the ground. He and his wife, Heidi, fled to the United States as religious refugees in 1997. He currently runs ChinaAid, a nonprofit organization that tirelessly advocates for the underground church in China and for political dissidents, as well as the lawyers and activists who place their lives on the line to defend them. Find out more at ChinaAid.org.

Bob is a distinguished professor on religion and public policy at Midwest University and a research PhD candidate at Durham University, UK. In addition to being the China analyst for Voice of the Martyrs, Bob is editor-in-chief of Chinese Law and Religion Monitor, a journal on religious freedom and the rule of law in China, and guest editor for Chinese Law and Government, a journal of UCLA. He received the 2007 John Leland Religious Liberty Award from the Southern Baptist Ethics & Religious Liberty Commission (ERLC). In 2012 Midwest University awarded Bob the Honorary Doctorate Degree on Global Leadership.

He currently lives with his wife and their three children in Midland, Texas.


Nancy French is a two-time New York Times bestselling author. Her books include Home and Away: A Story of Family in a Time of War (with David French), Not Afraid of Life (with Bristol Palin), A Winning Balance (with Shawn Johnson), and Red State of Mind. She lives in Tennessee. Reach her at NancyFrench.com.

▼▲
"Bob Fu has dedicated his life to bring freedom of religion to the Chinese people. His story is a testimony to the power of faith and an inspiration to people struggling to break free from oppression." - Mrs. Laura Bush

"The riveting account of a student leader of the Tiananmen Square protests who becomes a literal prisoner for Christ and then escapes to the West. Impossible to put down." - Eric Metaxas, New York Times Bestselling author of Bonhoeffer: Pastor, Martry, Prophet, Spy and Amazing Grace: William Wilberforce and the Heroic Campaign to End Slavery

"Like John the Baptist, Bob Fu has influenced people from all walks of life across the nation of China and beyond, and led many to repent and believe in Jesus. Anyone who cares about the persecution of God's household in China and in the Middle East should read this book." - Brother Yun, Chinese house church leader and author of The Heavenly Man

"This compelling and deeply moving account of Bob Fu's escape from China and his heroic work on behalf of other human rights workers there is likely to become a classic. From the very first page, you are hooked. There are few more convincing narratives of Christian courage under persecution and suffering." - David Aikman, Former Senior Correspondent for Time Magazine, author of One Nation Without God?

"Courageous, tireless, well-informed and effective. Bob Fu and China Aid are harbingers of the more just and open China that we pray is coming." - Dr. Os Guinness, author The Global Public Square

"Bob Fu's story is a gripping and inspiring account of courage and endurance. His personal experience of China's struggle for democracy, religious freedom, free speech, and human rights-particularly coercive population control-makes this an indispensable book, especially for anyone who admires China and its people and who yearns for reform and change. I feel privileged to have had a small walk-on part in what is a story of suffering but tempered by hope." - David Alton (Rt. Hon.Professor Lord Alton, House of Lords, Parliament, UK)

"I will always remember that night in early 1997 meeting Bob and Heidi and baby Daniel at Dulles airport, although I have met many people there over the years. It was easy to identify Bob as we met for the first time. That irrepressible spirit has become familiar to many, many others over the years since they first arrived in America. Bob and Heidi's experience in Beijing with persecution for their faith, and the uncertainty of life as exiles in Hong Kong, have given them a powerful sense of commitment to helping others who suffer for their faith and more generally, for the freedoms of expression and association. They have persevered through many twists and turns of the road, despite the costs. And throughout, they have sought ways to bring God's blessings to the Chinese people." - Dr. Carol Lee Hamrin, senior associate, Global China Center; research professor, George Mason University

"God's Double Agent is a moving testament to the liberating power of Christian faith over the empty ideological doctrine of Communism. Every freedom-loving person should read this book. Bob has done Christianity and the free world a great service by sharing his story of spiritual and political liberation. May many millions follow in his path." - Dr. Richard Land, president emeritus, The Ethics & Religious Liberty Commission (ERLC) of the Southern Baptist Convention; president, Southern Evangelical Seminary

"God's Double Agent is an engaging memoir of Pastor Bob Fu, founder and president of China Aid, which serves the persecuted church in China. Pastor Fu's story takes us from the hardship endured by his parents under harsh Communist policies, through his own birth into desperate circumstances and the bitterness he felt growing up. He tells how he was delivered from this bitterness through his conversion to Christianity, immediately began evangelizing others (dubbed "The Missionary" during graduate school), and his eventual escape to the United States. Written in an intimate and lively style, this account gives insight into the formation of a tireless advocate for the persecuted church in China, as well as a portrait of his bold, brilliant, and intrepid wife, Heidi." - Reggie Littlejohn, president, Women's Rights Without Frontiers

"This book is truly one of David and Goliath proportions. Bob Fu may physically be a little man, but in reality he is a giant: full of faith, courage, and tenacity. This is the amazing story of Bob's life spent fighting for freedom and justice both inside and outside of his beloved homeland of China." - Mervyn Thomas, chief executive, Christian Solidarity Worldwide

▼▲
I'm the author/artist and I want to review God's Double Agent: The True Story of a Chinese Christian's Fight for Freedom - eBook.
Back
Back