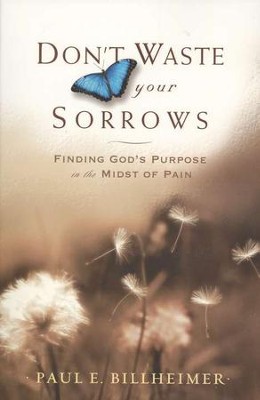 ▼▲
God's sometimes surprising tools for maturing and training His church are clearly explained in this eye-opening discussion on the role of suffering in a Christian's life. You will be amazed at the depth of spiritual growth possible for those who continue to trust God during life's difficulties.

▼▲
Discovering God's Miracle of Growth Through Times of Suffering

Published almost thirty years ago, this book speaks to every generation of Christian believers, helping them to gain an eternal perspective on life's sometimes painful experiences. Knowing that God has planned for the church to be trained through such circumstances will help readers to accept what they usually go to great lengths to avoid. Billheimer shows clearly that it is not the mere presence of pain in our lives that gives benefit, however. It is in a proper response to it that God is able to mature and prepare His church for her glorious future as the reigning bride of Christ. Christians of all ages learn how the difficulties they encounter in life can work for their good--if they don't "waste" them.

▼▲
Paul E. Billheimer authored several enduring books concerning the body of Christ, including Destined for the Throne, Love Covers, Destined to Overcome, and Destined for the Throne. He and his wife began a tent ministry in Anderson, Indiana, in 1936 that grew to include a Bible institute, a Christian high school and day school, and eventually a Christian television station. In their later years they worked with Trinity Broadcasting Network. They were married for sixty-three years and raised three children. He passed away in 1984.

▼▲
I'm the author/artist and I want to review Don't Waste Your Sorrows.
Back
Back