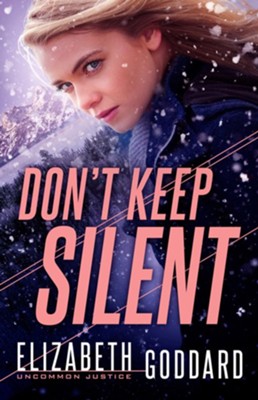 Investigative reporter Rae Burke will do anything to hunt down the facts, but
this time it’s personal. She’s not chasing a story—she’s searching for answers
on the disappearance of her missing sister-in-law. She’ll do whatever it
takes—even if it means facing Liam McKade, a man who almost lost his life
saving hers.
Former DEA agent Liam is restless to escape his past by hiding out at his
Wyoming ranch, but his past finds him anyway. When Rae, the reporter who
once blew his cover, inserts herself back into his life, the last thing Liam
wants to do is help her. But when Rae’s investigative skills put her in harm’s
way, Liam finds he has no choice but to protect her.


The stakes are high, and the romantic tensions ignite as Liam and Rae’s past catches up to them in this riveting
story of honor, forgiveness, and justice.

▼▲
Investigative reporter Rae Burke will do anything to find her missing sister-in-law, even if it means facing Liam McKade, a man who almost lost his life saving hers. A former DEA agent, Liam thought he could find peace at his Wyoming ranch, but he just doesn't feel at home anywhere anymore. When the reporter who blew his cover on an important investigation inserts herself back into his life, he's less than thrilled. But Rae's keen investigative skills have led her down the right path--and directly into the dragon's mouth--leaving Liam no choice but to protect her. As the danger increases, the past they both tried to flee catches up to them, along with the feelings they once had for each other.

USA Today bestselling and award-winning author Elizabeth Goddard plunges you into a fast-paced, high-stakes story of honor, forgiveness, and justice.

▼▲
Elizabeth Goddard is the USA Today bestselling author of more than 40 books, including Never Let Go, Always Look Twice, and the Carol Award-winning The Camera Never Lies. Her Mountain Cove series books have been finalists in the Daphne du Maurier Awards and the Carol Awards. Goddard is a seventh-generation Texan and can be found online at www.elizabethgoddard.com.

Can you offer a brief synopsis of Don’t Keep Silent?
Investigative Reporter Rae Burke wants nothing more than to follow in her award-winning journalist father’s footsteps. He stood up for the voiceless by exposing the evils in the world—and that got him killed. Rae is
willing to go into the darkest places to find and expose the truth. Now she’s in a race against time to find her missing sister-in-law, and she’ll go anywhere, even if it means facing Liam McKade, a former DEA agent who almost lost his life to save hers, and asking for his help. As their search ramps up, the dangers of their shared past begin to close in on them.

Liam McKade is the third McKade brother to be featured in the Uncommon Justice series. How is he
similar to his brothers? How is he different?
Like his brothers, Liam has a good heart. Also like his brothers, he escaped Wyoming for a while but finds himself drawn back to the home ranch just to get grounded again. He loves his brothers but at the same time needs his
space. He has a brooding demeanor and has experienced the darker side of life as an undercover DEA agent. He has come home, only to find that he can’t feel at home anywhere.

Rae and Liam have a complicated past. Without giving away any spoilers, what can you tell us about their relationship?
They are two of a kind—both on the same mission in life but using different methods. Liam had been attempting to shine light in the dark places in his undercover work, and Rae had been digging much too close to Liam’s case,
also wanting to expose the truth. Their passion and determination to make a difference led them on a collision course, for which they are both recovering on many levels.

Which character, if any, was the most challenging to write?
Liam was the biggest challenge for me. I’ve “known” him for a long time since he showed up—at least in thought—in Never Let Go, book 1 in the Uncommon Justice series. Then he has his own POV in Always Look Twice, book 2. In Don’t Keep Silent, he finally gets his own story. I wanted to stay true to the Liam I met as I gotto know him better through the course of writing this story, and at the same time, Liam needed his own space to grow and be his own “person.”

What do you hope readers take away from reading Don’t Keep Silent?
From experience, I know readers will often take away something I hadn’t considered during the writing process,which is always wonderful to hear about. For me, the big points in this story are about going the extra lengths to
expose evil and how we can do that if we speak up for those who can’t speak for themselves. We should be a light
in the darkness and the voice of truth in a world of lies.

What is your favorite part of the writing process?
Dreaming up new stories and visiting places I love as I write.

What do you think romantic suspense novels offer readers?
An escape. Christian romantic suspense, especially, offers readers a powerful emotional experience and the chance to witness a deep spiritual truth in some way—whether that’s, for example, redemption or forgiveness.

What other projects are you working on right now?
I’m currently finishing up the first book in my Rocky Mountain Courage series (to follow my Uncommon Justice series) and will be starting on the second book soon.

▼▲
I'm the author/artist and I want to review Don't Keep Silent, #3.
Back
Back