Don't Give Up, Don't Give In Lessons from an Extraordinary Life
By: Louis Zamperini, David Rensin 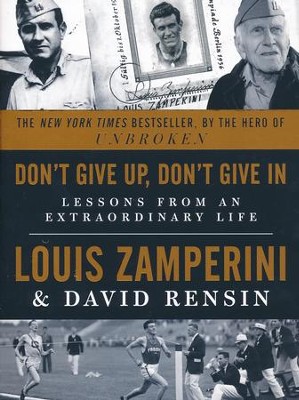 Don't Give Up, Don't Give In Lessons from an Extraordinary Life

▼▲
In Don't Give Up, Don't Give In, Louis Zamperini shares hard-won life-lessons from his remarkable journey. An Olympic athlete, and a Japanese prison camp survivor, Zamperini faced his share of challenges--the temptation to give up, to hate his enemies, and to give in to depression. After the war, it was his faith in God that allowed him to forgive and find healing. Completed just two days before he died at age ninety-seven, Don't Give Up, Don't Give In is a powerful last testament of a life lived fully.

Completed just two days before Louis Zamperini’s death at age ninety-seven, Don’t Give Up, Don’t Give In shares a lifetime of wisdom, insight, and humor from “one of the most incredible American lives of the past century” (People). Zamperini’s story has touched millions through Laura Hillenbrand’s biography Unbroken and its blockbuster movie adaptation directed by Angelina Jolie. Now, in his own words, Zamperini reveals with warmth and great charm the essential values and lessons that sustained him throughout his remarkable journey.

He was a youthful troublemaker from California who turned his life around to become a 1936 Olympian. Putting aside his track career, he volunteered for the army before Pearl Harbor and was thrust into World War II as a B-24 bombardier. While on a rescue mission, his plane went down in the middle of the Pacific Ocean, where he survived against all odds, drifting two thousand miles in a small raft for forty-seven days. His struggle was only beginning: Zamperini was captured by the Japanese, and for more than two years he courageously endured torture and psychological abuse in a series of prisoner-of-war camps. He returned home to face more dark hours, but in 1949 Zamperini’s life was transformed by a spiritual rebirth that would guide him through the next sixty-five years of his long and happy life. Louis Zamperini’s Don’t Give Up, Don’t Give In is an extraordinary last testament that captures the wisdom of a life lived to the fullest.

A son of Italian immigrants, Louis Zamperini (1917-2014) was a U.S. Olympic runner, World War II bombardier, and POW survivor. After the war, he returned to the United States to found the Victory Boys Camp for at-risk youth and became an inspirational speaker. Zamperini's story was told in his 2003 autobiography Devil at My Heels, as well as in Laura Hillenbrand's 2010 biography Unbroken.

David Rensin worked closely with Louis Zamperini for many years and cowrote Devil at My Heels, as well as fifteen other books, including five New York Times bestsellers.

▼▲
“A fitting capstone to the Zamperini legend. ... This valedictory book reflects the charm and colorful authority he brought to the world.”
“Not simply another rehashing of Zamperini’s incredible history, this second memoir, dictated to co-author Rensin during the last year of the author’s life, brims with sage wisdom, learned advice and fond observations from his adventurous 97 years. ... Inspirational.”
“One of the most incredible American lives of the past century.”
“Louis Zamperini is a modern miracle. His life reads like something out of a storybook.”
“Louis Zamperini’s life is a story that befits the greatness of the country he served.”
“An extraordinary hero.”

▼▲
I'm the author/artist and I want to review Don't Give Up, Don't Give In Lessons from an Extraordinary Life.
Back
×
Back
×