Skip to main content
WINTER BIBLE SALE: Over 1,200 Deals Up to 80% Off, thru 2/1. Shop Now >
Dogmatics after Babel: Beyond the Theologies of Word and Culture - eBook
By: Ruben Rosario RodrÃ­guez
Stock No: WW99776EB 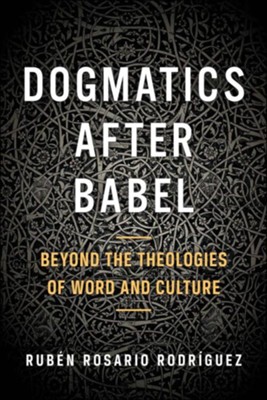 Dogmatics after Babel: Beyond the Theologies of Word and Culture - eBook

The long-standing division between Barth's theology of revelation and Tillich's theology of human culture has created an impasse. Is there an alternative? In Dogmatics After Babel, Rubén Rosario Rodríguez  proposes a third way that's rooted in the work of liberation theologians on the Holy Spirit's role and a comparative analysis of the teachings of God's hiddenness in Judaism, Christianity, and Islam.

RubÃ©n Rosario RodrÃ­guez addresses the long-standing division between Christian theologies that take revelation as their starting point and focus and those that take human culture as theirs. After introducing these two theological streams that originate with Karl Barth and Paul Tillich, respectively, Rosario asserts that they both seek to respond to the Enlightenment's critique and rejection of Christianity. In so doing, they have bought into Enlightenment understandings of human reality and the transcendent.

Rosario argues that in order to get beyond the impasse between theologies of the Word and culture, we need a different starting point. He discovers that starting point in two sources: (1) through the work of liberation and contextual theologians on the role of the Holy Spirit, and (2) through a comparative analysis of the teachings on the hiddenness of God from the three ââ¬ÅAbrahamicââ¬ï¿½ religions ââ¬"Judaism, Christianity, and Islam.

Rosario offers a strong argument for why this third theological starting point represents not just a marginal or niche position but a genuine alternative to the two traditional theological streams. His work will shift readers' understanding of the options in theological discourse beyond the false alternatives of theologies of the Word and culture.

Rubén Rosario Rodríguez is Associate Professor in the Department of Theological Studies at Saint Louis University, where he also serves as International Studies Director for the Mev Puleo Scholarship Program. He is the author of Racism and God-Talk: A Latino/a Perspective and Christian Martyrdom and Political Violence: A Comparative Theology with Judaism and Islam.

"There is much to commend in Rosario Rodríguez's latest work. This book is highly recommended for those interested in theological methods in light of our changing, pluralistic context and should be required reading for students in theology. It is a gift to them as well as to more advanced scholars." – Journal of Hispanic/Latino Theology

▼▲
I'm the author/artist and I want to review Dogmatics after Babel: Beyond the Theologies of Word and Culture - eBook.
Back
Back