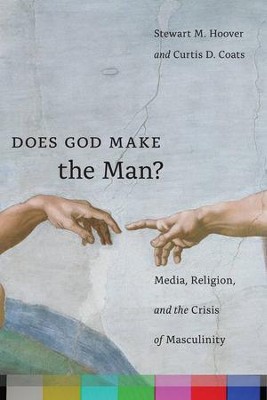 Does God Make the Man? Media, Religion, and the Crisis of Masculinity

Many believe that religion plays a positive role in mens identity development, with religion promoting good behavior, and morality. In contrast, we often assume that the media is a negative influence for men, teaching them to be rough and violent, and to ignore their emotions. In Does God Make the Man?, Stewart M. Hoover and Curtis D. Coats draw on extensive interviews and participant observation with both Evangelical and non-Evangelical men, including Catholics as well as Protestants, to argue that neither of these assumptions is correct.

Dismissing the easy notion that media encourages toxic masculinity and religion is always a positive influence, Hoover and Coats argue that not only are the linkages between religion, media, and masculinity not as strong and substantive as has been assumed, but the ways in which these relations actually play out may contradict received views. Over the course of this fascinating book they examine crises, contradictions, and contestations: crises about the meaning of masculinity and about the lack of direction men experience from their faith communities; contradictions between men's religious lives and media lives, and contestations among men's ideas about what it means to be a man.

The book counters common discussions about a "crisis of masculinity," showing that actual men do not see the world the way the "crisis talk" has portrayed it - and interestingly, even Evangelical men often do not see religion as part of the solution.

Does God Make the Man? is a fascinating look at how evangelical and ecumenical men process the messages they hear about masculinity from religion and media. The authors organized focus groups and recorded hundreds of hours of conversations to see if religion is vital to developing masculine identity. They conclude that, although evangelical men may claim to learn gender roles from the Bible, the actual sources of this knowledge are media and culture. As a result, both groups still believe there are male prerogatives of protection, provision and purpose, yet they are looking for a larger purpose for their lives.

Hoover and Coats argue that there are no gender-specific biblical ideals (unlike typical complementarian teachings regarding masculine identity; how gender is expressed is learned from culture. Scripture instructs both women and men in being Christ followers.

When interviewers asked these men to describe what the church teaches about "how to be a man," there was difficulty from both the evangelical and ecumenical men in recalling any sort of church teaching. One evangelical responded this way:

I'm trying to think of it exactly, I mean real specific teaching? I don't know. Maybe I missed it. I mean generally I think they would take a biblical approach toward the sexes. This past week they were talking about nominating people for elders. . . . And they specifically said a man . . . probably five years ago, that wouldn't have struck me as odd. . . . But I think in this day and age where things are progressing toward equality of the sexes . . . that's probably a distinction he had to make. (36)

The interviewee notes that the church needed to be explicit that the elder had to be male, which shows an awareness that women now have a greater presence in leadership.

I was encouraged to see the authors report on the impact of feminism on the uncertain ground of the evangelical idea of "headship." One respondent, who has a commitment to male-only leadership, when asked to describe women's roles in relation to "headship," offered a somewhat egalitarian description.

Most people stop at "woman be submissive to your husband..." and that's what they quote. But the next line is, "men be submissive to your wife as you are submissive to" . . . I think in that role, it's respect, but it's equal respect, equal love. It's pretty much equal everything. It's not like, women don't speak in the church. . . . But my wife can have her opinion, but she knows - she just wants me to listen to her - but I still have the final say. (38)

The same man, when asked about "gender beyond church and home," gave a rather convoluted response:

You mean as far as women CEOs? I actually think it's pretty cool. The thing a lot of people need to realize when they talk about that there shouldn't be female presidents [is that] they have to answer to a board. So, and not that the boards [don't have] females, but if there was a Chairman of the Board that was a female, I don't know of any. So, I still think you could put - I think they are great in that role, but a President of our country? I dont think so [laughs]...I guess Id have to think about why because I can't just tell you. . . . you know I think if you look at the biblical principles, that would be why. (38-39)

Hoover and Coats explain that their main research interests are traditional involvement in religion and how it intersects with media, and investigating "neo-traditionalist" claims of a "crisis of masculinity" where societal ills are thought to be the result of fatherless families and of "toxic masculinity" learned from media. Neo-traditionalists believe that strong male leadership will fix the various problems of both family and culture.

The authors began this study thinking they would find, at least within the ranks of evangelicalism, men who would clearly define what it means to "be a man." While they found that Christianity is central to the lives of all the men in their study, their personal religious training has done little to shape their ideas of masculinity. Nor has it instilled a drive towards civic involvement; in fact, it seems to have prompted a focus on home and childrearing. The authors write:

Christianity is central to the identities and life experiences of the men in this study, but it does not simply instill positive gender identity or encourage public involvement. Further, media are as central as religion in the narratives of these devoted Christian men. This centrality of media does not create the toxic masculinity feared by conservative critics. Rather, media often reinforce Christian masculinity in ways that religion does not seem to. The men in this book do not engage media, Christianity, or the general "crisis of masculinity" discourse in the ways suggested by conservative critics. (5)

Their research finds that, rather than engage problems in their communities or society at large, these men put a premium on raising their children and being identified as good fathers; any other commitments would take them away from time with their families.

Hoover and Coats also look at the influence by the fathers of these men. Most respondents mentioned their fathers, but they qualified the fathers' influence. They write, "Particularly telling to our project, most men don't attribute a great repertoire of specific ideas to their fathers. Instead, while most seem to have learned what they consider positive things from fathers, many do not want to emulate some key things about their fathers' practices. . . . 'My dad was a great dad, but...'" (72).

The participants could not talk about masculinity without talking about media. "Conversely, biblical characters rarely came up at all" (1056). It seems these men look to media as the main sources of examples, including iconic television and movies. Ecumenical men chose examples like Bill Cosby; Tom Hanks as Captain John Miller in Saving Private Ryan; Russell Crowe in Gladiator and Cinderella Man; Mister Rogers; Gregory Peck as Atticus Finch in To Kill a Mockingbird; Jimmy Stewart as George Bailey in It's a Wonderful Life; Dev Patel as Jamal in Slumdog Millionaire; Clint Eastwood as a director; and Presidents Barack Obama and Jimmy Carter. For evangelical men, the list included Bill Cosby; Mel Gibson in Braveheart and The Patriot; Mathew Fox as Jack in Lost; and Michael Landon as Charles Ingalls in Little House on the Prairie (103).3

Evangelical and ecumenical men chose many of the same characters as representative of a masculine ideal. While they both identify with Hanks's character in Saving Private Ryan, or discussed Gibson's version of William Wallace in Braveheart, they brought their own spin to the characters. Where evangelicals might find a Christ-like sacrifice in Braveheart, ecumenical men might resonate with the reluctant revolutionary, only joining the cause after his "family" was destroyed.

Interviewees brought presuppositions to the media they cited to give meaning to their own beliefs. The authors write,

Respondents who were the most committed to the goals of the conservative critics, for example, engaged secular mainstream media in their daily lives in ways that actually reinforced neo-masculinist ideas about men, fathers, and families rather than contradict them. The same could be said for our more progressive or egalitarian men. They were also in the thrall of fairly traditional ideas about masculinity, expressed to some extent in their media diets. (107)

The book reinforces that what and how we learn about gender is influenced most by culture. Once those beliefs are solidified we tend to see and hear information that supports our belief systems.

An interesting change from "tradition" is that the men in both groups consider being a good father as a primary goal. That these men have invested their time in the unpaid work of childcare in the home is an interesting influence of feminism. The authors note that these men are looking to be "more nurturing husbands and fathers" (158).

Does God Make the Man? is primarily written for those studying the intersection of media and religion. There is an assumption that the reader will be somewhat familiar with feminist theory, including a basic understanding of gender constructivism. Overall, this book is approachable for the interested reader wanting to understand more about the influences of media on communication and meaning-making in society.

This book will not tell you how to be a better Christian, but it will show how media influences society through the example of two groups of men who explore what it means to be a Christian man. This book shows how certain men make sense of Christianity at home and at work, and how they see their roles as men. What they report also represents new perceptions of fatherhood in the face of patriarchy - a tradition which most evangelical and ecumenical men want to discard. Both groups place a premium on equality and shared responsibility in the domestic realm, which may give egalitarians room for hope.

In the end, this book shows how complicated the influences are at the crossroads of media and religion. It is encouraging to see reports of the greater influence of feminism on conservative Christians, yet at the same time discouraging that the media influences that capture these men's attention still show a patriarchal, gender-essentialist message.

▼▲
I'm the author/artist and I want to review Does God Make the Man? Media, Religion, and the Crisis of Masculinity.
Back