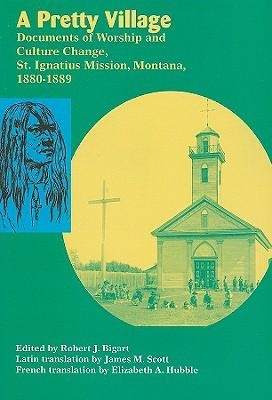 ▼▲
The 1880s were a critical decade for the Salish and Kootenai people of the Flathead Indian Reservation in western Montana. The recent loss of the plains buffalo herds forced tribal members to look for new ways to support themselves. The priests and schools at St. Ignatius Mission taught many of the skills they needed, but not without simultaneously pressuring the Indian people to abandon valuable elements of Salish and Kootenai culture.
A Pretty Village is a collection of original documents describing life at St. Ignatius Mission and the interactions between missionaries and tribal people. Assembled from St. Ignatius church records, letters written by missionaries, reports of visiting newspapermen, government documents, and other sources, the collection provides detailed descriptions of events that affected the Indian community and in so doing takes the reader on a trip through time that will fascinate general readers and historians alike.

▼▲
I'm the author/artist and I want to review A Pretty Village: Documents of Worship and Culture Change, St. Ignatius Mission, Montana, 1880-1889.
Back
×