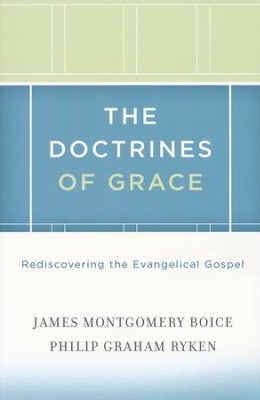 The Doctrines of Grace: Rediscovering the Evangelical Gospel

▼▲
The late James Boice and his successor at Philadelphia's Tenth Presbyterian Church contend that we live in an age of casual Christianity. Evangelicalism desperately needs a return to the doctrines that once reformed the church. Advocating a practical-minded, kindhearted, and biblically based faith, Boice and Ryken present a compelling exposition of Calvinism's five points.

Two noted pastors denounce casual Christianity and proclaim a recovery of the fundamental doctrines of the faith: total depravity, unconditional election, limited atonement, irresistible grace, and the perseverance of the saints.

Philip Graham Ryken (DPhil, University of Oxford) is the eighth president of Wheaton College. He preached at Philadelphia’s Tenth Presbyterian Church from 1995 until his appointment at Wheaton in 2010. Ryken has published more than 50 books, including When Trouble Comes and expository commentaries on Exodus, Ecclesiastes, and Jeremiah. He serves as a board member for the Gospel Coalition, the Lausanne Movement, and the National Association of Evangelicals.

R. C. Sproul (1939–2017) was founder of Ligonier Ministries, an international Christian discipleship organization located near Orlando, Florida. He was also first minister of preaching and teaching at Saint Andrew’s Chapel in Sanford, Florida, first president of Reformation Bible College, and executive editor of Tabletalk magazine. His radio program, Renewing Your Mind, is still broadcast daily on hundreds of radio stations around the world and can also be heard online. Sproul contributed dozens of articles to national evangelical publications, spoke at conferences, churches, colleges, and seminaries around the world, and wrote more than one hundred books, including The Holiness of God, Chosen by God, and Everyone’s a Theologian. He also served as general editor of the Reformation Study Bible.

▼▲
I'm the author/artist and I want to review The Doctrines of Grace: Rediscovering the Evangelical Gospel.
Back
Back