Skip to main content
CYBER MONDAY IS HERE! Shop savings up to 88%. >
Great Doctrines of the Bible: God the Father, God the Son; God the Holy Spirit; The Church and the Last Things (3 Volumes in 1)
By: D. Martyn Lloyd-Jones
Stock No: WW38797X 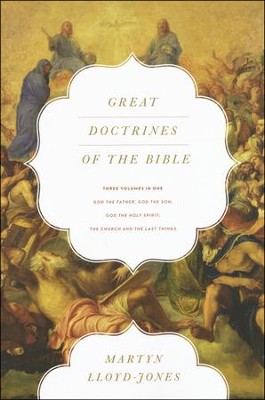 Great Doctrines of the Bible: God the Father, God the Son; God the Holy Spirit; The Church and the Last Things (3 Volumes in 1)

▼▲
Great Doctrines of the Bible is a comprehensive, accessible, and systematic theology of the Christian faith by one of evangelicalism's most beloved figures.

Containing three separate works of D. Martin Lloyd Jones including:We live in unprecedented times. An era which openly mocks God, flouts its sins, and rejects sound teaching. The late D. Martin Lloyd Jones expounded and defended the greatest doctrines of Christianity throughout his career. His writing is grounded in both Scripture and theological convictions of the Reformation and it is as powerful today as they ever were. It is essential that we think with clarity about doctrine with clarity because so much in our world-from the media to our schools-openly defies biblical truth.

If you've realized the urgency of establishing the doctrinal ground on which you stand, the chapters of this book will help you build that foundation. Lloyd-Jones clearly explains the character and ministries of each person of the trinity, as well as the Bible's teaching on the church, the afterlife, and end times. If you want to learn more about the great doctrines of the Bible but don't want to wade through lengthy academic works, here is a complete guide that will help you learn and integrate Christian doctrine with your daily life.

Including three classic volumes: God the Father, God the Son; God the Holy Spirit; and The Church and the Last Things—this three-in-one set helps people understand and apply Christian theology.

▼▲
I'm the author/artist and I want to review Great Doctrines of the Bible: God the Father, God the Son; God the Holy Spirit; The Church and the Last Things (3 Volumes in 1).
Back
Back