Skip to main content
THE MEGA CHRISTMAS SALE: Save up to 85% off through 10/19 >
A Hot Pepper Corn: Richard Baxter's Doctrine of Justification in Its Seventeenth-Century Context of Controversy
By: Hans Boersma
Stock No: WW832821 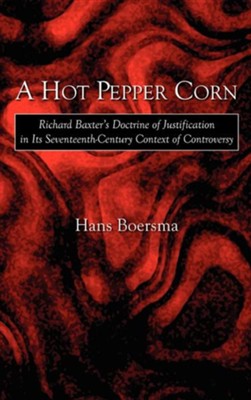 A Hot Pepper Corn: Richard Baxter's Doctrine of Justification in Its Seventeenth-Century Context of Controversy

▼▲
This study takes the reader to the intriguing debates on justification in seventeenth-century English Puritan thought. Richard Baxter (1615-91), the well-known Kidderminster pastor and theologian, insisted that the Calvinists of his day, with their unyielding emphasis on the sola fide of the Reformation, ran the danger of ignoring the conditions that came with God's gift of the covenant of grace. Justification, Baxter insisted, required at least some degree of faith and works as the human response to the love of God. As one of his antagonists, John Crandon, put it: "If we magnifie one grain of our own pepper to that height that we make it a part of that righteousness by which to stand at Gods tribunall this one grain will sink us down to hell, so hot a poison is Mr. Brs pepper-corn." The mix of theological differences and unbending personality traits resulted in years of acrimonious and unyielding debate. Building on previous studies of Baxter's soteriology, this study maintains that Baxter is best understood as an eclectic scholastic covenantal theologian for whom the distinction between God's conditional covenant and his absolute will is key to the entire theological enterprise.

▼▲
I'm the author/artist and I want to review A Hot Pepper Corn: Richard Baxter's Doctrine of Justification in Its Seventeenth-Century Context of Controversy.
Back