Skip to main content
NEW CYBER DEALS Save up to 90% thru 12/12  shop now >
Faith Alone, The Doctrine of Justification: What the Reformers Taught...and Why It Still Matters
By: Thomas R. Schreiner
Stock No: WW515780 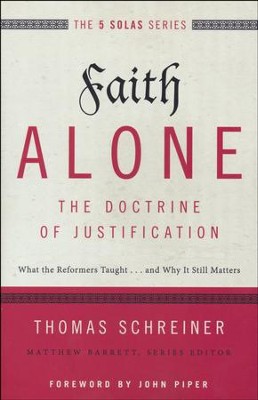 Faith Alone, The Doctrine of Justification: What the Reformers Taught...and Why It Still Matters

▼▲
The Five Solas series looks at the declarations that formed the heart of the Protestant Reformation. In this volume, Faith Alone, Thomas Schreiner covers the doctrine of sola fide. He summarizes the history, outlines its biblical basis in both testaments, discusses whether justification is transformative or forensic, and addresses contemporary challenges.

Renowned biblical scholar Thomas Schreiner looks at the historical and biblical roots of the doctrine of justification and offers an updated defense of this pillar of Reformed theology.

Reinvigorating one of the five great declarations of the Reformation—sola fide—Schreiner:

Five hundred years after the Reformation, the doctrine of justification by faith alone still needs to be understood and proclaimed. In Faith Alone you will learn how the rallying cry of "sola fide" is rooted in the Scriptures and how to understand this doctrine in a fresh way.

Historians and theologians have long recognized that at the heart of the sixteenth-century Protestant Reformation were five declarations, often referred to as the "solas." These five statements summarize much of what the Reformation was about, and they distinguish Protestantism from other expressions of the Christian faith: that they place ultimate and final authority in the Scriptures, acknowledge the work of Christ alone as sufficient for redemption, recognize that salvation is by grace alone through faith alone, and seek to do all things for God’s glory.

The Five Solas Series is more than a simple rehashing of these statements, but instead expounds upon the biblical reasoning behind them, leading to a more profound theological vision of our lives and callings as Christians and churches.

Matthew Barrett (PhD, The Southern Baptist Theological Seminary) is associate professor of Christian theology at Midwestern Baptist Theological Seminary, as well as executive editor of Credo Magazine. He is the editor of The Five Solas Series and the author of several books, including God's Word Alone, Reformation Theology, Salvation by Grace, and Owen on the Christian Life.

▼▲
I'm the author/artist and I want to review Faith Alone, The Doctrine of Justification: What the Reformers Taught...and Why It Still Matters.
Back
Back