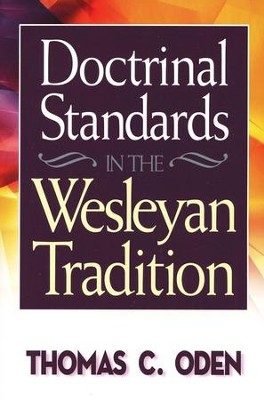 ▼▲
What are our core beliefs? Doctrinal Standards in the Wesleyan Tradition, Revised Edition, narrates the history of the formation of Wesleyan doctrines, describing how they were transplanted from the British Isles to North American, how they became constitutionally protected in Wesleyan-rooted churches.

The first edition of this book affected the outcome of the 1988 General Conference of The United Methodist Church as the delegates decided many then-disputed doctrinal issues. This revised edition addresses the continuing hunger for more precise and useful information on the doctrinal traditions of mainline Protestantism. Hence the arguments have been updated with more than 400 changes.

▼▲
Thomas C. Oden, the retired Henry Anson Buttz Professor of Theology and Ethics, is an ancient ecumenical evangelical with a passion for orthodoxy. For over thirty years he taught at Drew University and came under the influence of his "irascible, endearing Jewish mentor" Will Herberg. Herberg bluntly told Oden that he would remain "densely uneducated" unless he "read deeply in patristic writers." This focus on patristics (the early church fathers) helped professor Oden to realize that modernity is over. As he probed the early church writers for several decades, he incorporated and rechanneled his activism and idealism for the modernist social gospel into a recovery of the classic religious tradition. Scripture found new life in him, which means he repented an enthrallment with progressive social causes in favor of a stable two-thousand year memory, which he defines as orthodoxy.

▼▲
"In a masterful study Tom Oden has laid out a compelling argument as to why John Wesley's Sermons and Notes were rightly affirmed as doctrinal standards by the United Methodist General Conference in 1968. Indeed, this gifted theologian not only rightly appreciates the Wesleyan tradition and its distinctives, but he also helps to support those elements of the heritage that are so necessary for real, vital, scriptural Christianity today." -Kenneth J. Collins, Professor of Wesley Studies and Historical Theology, Asbury Theological Seminary

▼▲
Thomas C. Oden is the Henry Anson Buttz Professor of Theology and Ethics at Drew University in Madison, New Jersey.

▼▲
I'm the author/artist and I want to review Doctrinal Standards in the Wesleyan Tradition: Revised Edition.
Back
Back