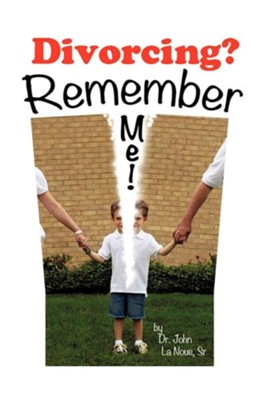 ▼▲
This book, Divorcing? Remember Me tells his story of the effects of divorce on him as a young child and what it took to overcome it, so he could walk with God in broken places. It also tells the story of how he and his wife, both from broken homes, were able to put together a marriage that has lasted 57 years. It covers what God taught him about dating, courtship, and marriage. It contains some helpful hints on how to have a happy marriage. It contains both heartbreak and humor. He and his family have traveled the world helping people in disasters for the last 40 plus years. He and his wife, "Dr. L.," have two children, John La Noue, Jr. MD, a pediatric surgeon, and Lydia La Noue Slinkard (Mrs. Todd Slinkard), a housewife and mother of two girls: Rebecca and Laura, in New Jersey. He has been a pastor, college minister, a denominational worker with the Baptist General Convention of Texas and Lifeway Christian Resources. He has been in North Korea so much they call him "Halabaji" (Grandfather) John. Many have called him "Indiana Jones with a Bible and a skillet." "Dr. John" was born, raised and educated in Texas, with the exception of his Doctorate which he received in San Francisco, CA. He is the author of, Walking With God in Broken Places and Lessons I Learned Along the Way, which tells the story of disaster relief and how God answers prayer in crises.

▼▲
I'm the author/artist and I want to review Divorcing? Remember Me!.
Back