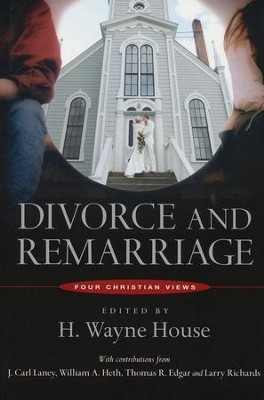 ▼▲
When it comes to divorce and remarriage, everyone appeals to Scripture but no one agrees on what it says. In this book, four Christian thinkers (J. Carl Laney, William Heth, Thomas Edgar, and Larry Richards) debate the more perplexing points. Each essayist presents his own view and critiques the others. Case studies apply theories to real-life situations. Contributors are J. Carl Laney, William A. Heth, Thomas R. Edgar, and Larry Richards. Paperback.

▼▲
Divorce. No one likes it, but it doesn't go away. Even among Christians, the divorce rate continues to climb. How should Christians approach this issue? May Christians ever legitimately divorce? If they divorce legitimately, may they remarry? Not everyone who appeals to Scripture agrees on how we should understand what it says about divorce and remarriage. In this book, four authors present their distinct perspectives. Carl Laney argues that the Bible indicates that marriages are always intended to be permanent, that there is never a need for divorce and that remarriage is never permissible after divorce. William Heth contends that while there are legitimate biblical grounds for divorce, there are no legitimate grounds for remarriage after divorce. Thomas Edgar defends the position that Scripture allows for divorce and remarriage in cases of adultry or desertion. Larry Richards holds that Scripture, while decrying divorce and the pain it causes, points to a God of grace who will not condemn those who divorce and remarry. Such a sensitive debate cannot remain abstract, so a case study accompanies each position, followed by critical responses from each essayist. The result is a thoughtful, helpful resource for all who wish to think biblically about a crucial issue confronting the church.

▼▲
is president and professor of biblical and theological studies at Oregon Theological Seminary in Salem, distinguished professor of biblical and theological studies at Faith Seminary in Tacoma, Washington, and adjunct professor of law at Trinity Law School in Santa Ana, California. is the author of is the coauthor (with Gordon Wenham) of is the author of is the author of J. Carl Laney is professor of biblical literature and coordinator for Israel study programs at Western Seminary in Portland, Oregon. He is the author of a number of books, including (with Robert B. Hughes) and William A. Heth is a professor in the Department of Biblical Studies, Christian Education and Philosophy at Taylor University in Upland, Indiana. He is also coauthor with Gordon Wenham of Thomas R. Edgar is Distinguised Professor of New Testament Literature and Exegesis at Capital Bible Seminary in Lanham, Maryland. He is also the author of Larry Richards taught at Wheaton College in Wheaton, Illinois, for several years and authored textbooks in Christian education that are widely used. Now a full-time writer, he has written over one hundred books, including and the Richards has also written many devotional books for young people and adults, and authored the notes for the bestselling

▼▲
I'm the author/artist and I want to review Divorce & Remarriage: 4 views.
Back
×
Back
×