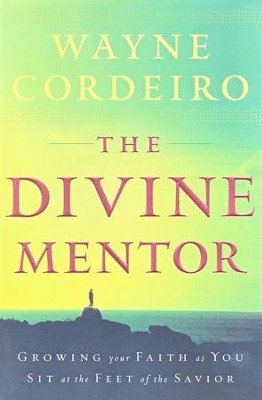 The Divine Mentor: Growing Your Faith As You Sit at the Feet of the Savior

This product is part of our current Big Summer Blowout promotion.
Buy Item

▼▲
Wasted years and untold tears---God wrote the book on avoiding "if onlys"! Discover how a disciplined, systematic digesting of Scripture gives you the benefit of countless experiences and invaluable life lessons. From routine reading to fresh encounters, you'll learn to listen to the Holy Spirit's eternal counsel as you spend time in his living Word. 240 pages, softcover from Bethany.

▼▲
Many believers settle for a spiritual routine that lacks God's presence. But what they truly want, and truly need, is a dynamic, vital, and intimate relationship with God. Here Wayne Cordeiro gently but directly shows readers how to move from routine to relationship--from mundane actions to fresh encounters--by learning to hear Him speak to them through the Bible. Through stories, lessons, and anecdotes, Cordeiro equips readers to listen to the promptings of the Holy Spirit as they read God's Word, enabling them to transform their daily quiet time with the Lord.

▼▲
Wayne Cordeiro is a senior pastor of New Hope Christian Fellowship in Honolulu, Hawaii, one of the nation's fastest growing churches. Pioneered by him, it has grown to over 12,000 in weekend attendance since 1995, with many attendees being first-time Christians. Wayne is an author, songwriter, and highly sought-after conference speaker. His books include Doing Church as a Team, Attitudes That Attract Success, and The Divine Mentor. His speaking takes him around the world. He is a church planter at heart and has helped to plant 83 churches in the Pacific Rim. Wayne and his wife, Anna, have three children and live in Honolulu.

▼▲
I'm the author/artist and I want to review The Divine Mentor: Growing Your Faith As You Sit at the Feet of the Savior.
Back
Back