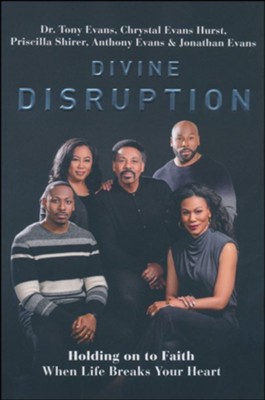 Divine Disruption: Holding on to Faith When Life Breaks Your Heart

▼▲
God breaks through our hardships with hope! Discussing the faith-shaking experience of losing eight loved ones in two years, pastor Tony Evans and his four children form a unique "Kingdom Legacy" partnership; open themselves to the honest questions, raw emotions, and solutions each experienced; and demonstrate how even devastating tragedies can glorify God. 208 pages, hardcover from Nelson.

Learn how to work your way through life’s unexpected challenges with grace and find a deeper faith while on your journey. In this biblical and conversational book by Dr. Tony Evans and his four adult children—Chrystal Evans Hurst, Priscilla Shirer, Anthony Evans, and Jonathan Evans—you will hear five insightful perspectives on what it means to hold on to faith when life breaks your heart.

We have all been through difficult seasons and times in life when it seems like the hits keep coming and you can barely catch your breath. The Evans family knows what this is like, as they’ve experienced the deep grief of losing eight loved ones in less than two years’ time, including the devastating passing of Lois Evans, the matriarch of the family.

In Divine Disruption, Dr. Tony Evans and his children pull back the curtain on their faith-shaking experiences, in order to provide biblical wisdom and practical encouragement for how to deal with the hard, unexpected things we all inevitably face.

You’ll walk away with insights on:

Join the Evans Family in this unique Kingdom Legacy partnership as they candidly share honest questions they’ve asked, raw emotions they’ve felt, and solutions they’ve learned. Your life may have been interrupted, but you can use that to grow closer to God—and find peace.

Dr. Tony Evans is the founder and senior pastor of Oak Cliff Bible Fellowship in Dallas, founder and president of The Urban Alternative, and bestselling author of more thanone hundred books, booklets, and Bible studies. The first African American to earn a doctorate of theology from Dallas Theological Seminary and to publish the first full-Bible commentary and study Bible, Dr. Evans has been named by Baylor University as one of the twelve Most Effective Preachers in the English-speaking world.

Chrystal Evans Hurst is the bestselling author of She's Still There and co-author of Kingdom Woman, with her father Dr. Tony Evans. She reaches a wide audience speaking at conferences, sharing on her blog and podcast, and teaching and leading women in her home church and around the world. In addition to her work and ministry, Chrystal is a COO (Chief Operating Officer), cultivating hearts and commanding chaos at home. She is a mother of five and homeschools three boys around the kitchen table while hugging two adult girls, a son-in-love, and three grandchildren every chance she gets. Chrystal is grateful to share her life with her husband, Jessie, in their home just outside of Dallas, Texas. You can find Chrystal and the chronicles of her life at chrystalevanshurst.com.

Anthony Evans has voiced the gospel with a melodic, thought-provoking style for two decades and has emerged as one of Christian music's premier worship leaders and singer/songwriters. Along the way, he has released ten solo projects, two of which debuted at #1 on Billboard's Top Gospel Album charts, released the book Unexpected Places, produced numerous music videos, acted in three movies, and performed as Beast in the Disney Hollywood Bowl production of Beauty and the Beast. Anthony received his first Grammy nomination for his executive production work on the gospel album My Tribute. He has collaborated with his father, beloved pastor and international speaker Dr. Tony Evans, his sisters, Priscilla Shirer and Chrystal Evans Hurst, along with his brother, Jonathan Evans, in the book Divine Disruption and in many inspirational events.

Anthony's appearance on NBC's The Voice led him to perform and produce vocals for various major artists and networks. He also has been enlisted as a talent producer for popular reality and competition shows. His powerful, one-of-a-kind voice has allowed him not only to vibrate the doors of the church but also to venture beyond them.

Jonathan Evans is a mentor, author, speaker, chaplain, and former NFL fullback. He serves with his pastor, friend, and father, Dr. Tony Evans, both in the local church and the national ministry. A graduate of Dallas Theological Seminary with a masters degree in Christian Leadership, Jonathan also serves as the chaplain of the Dallas Cowboys and co-chaplain of the Dallas Mavericks. Jonathan and his wife Kanika are the proud parents of Kelsey, Jonathan II, Kamden, Kylar, and Jade Wynter. They reside in Dallas, Texas.

▼▲
STARRED REVIEW 'The close-knit family focuses here on lessons learned after the death of eight extended family members in less than two years, and, to that end, they share personal insights and scriptural examples of how to cling to hope in God in the midst of grief. [Dr. Tony] Evans's children celebrate their mother's legacy with fond recollections of family meals and celebrations, and explain that the book is the fulfillment of their mother's desire that they work together and combine the strengths of their individual ministries. Any Christian who has wrestled with loss will appreciate this message of hope.' -- Publishers Weekly

▼▲
I'm the author/artist and I want to review Divine Disruption: Holding on to Faith When Life Breaks Your Heart.
Back
Back