We are OPEN and SHIPPING - click here for shipping estimates
PRE-SUMMER CYBER SALE EXTENDED thru 6/1 ~ Over 2,500 items up to 90% off
Discussing Mere Christianty--DVD and Participant's Guide
By: Devin Brown, Eric Metaxas 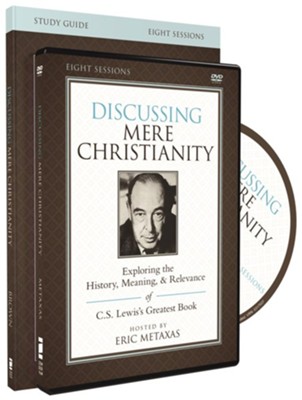 Mere Christianity is one of the most read and beloved Christian books of all time. Taught by a variety of C.S. Lewis experts and advocates, this first of its kind video curriculum explores the meaning, history, and contemporary application of the book. Includes both the DVD and study guide. Each participant will need their own study guide, sold separately. 8 sessions.

In this eight-session video group study, you will discover why Mere Christianity by C.S. Lewis is one of the most read and beloved Christian books of all time. But seventy years later from when it was first delivered on radio, what relevance does it have to our world today? Host Eric Metaxas and a variety of Christian leaders&minus;including Philip Yancey, Alister McGrath, Devin Brown, Paul McCusker, Douglas Gresham, and others&minus;help us understand the timeless message of C. S. Lewis in fresh ways for a new generation.

The first purpose of this video study is to explore the positive ideas that C.S. Lewis has so eloquently written about in Mere Christianity for those who already call themselves Christian. The second purpose is to explain in an engaging, winsome and non-threatening way the basic tenets of the Christian faith as illustrated by C.S. Lewis to those who do not claim to be Christian. This study aims to fulfill the vision of C.S. Lewis of reaching people from all faith backgrounds.

This pack contains one study guide and one DVD.

Devin Brown is a Lilly Scholar and Professor of English at Asbury University. He is an expert on C. S. Lewis and J. R. R. Tolkien and the author of nine books, among them the most recent biographies written on the two authors. He has served as Scholar-in-Residence at The Kilns, Lewis's home in Oxford, and was a contributor to The Screwtape Letters: Annotated Edition and a member of the Advisory Board for The C. S. Lewis Bible.

Eric Metaxas is the #1 New York Times bestselling author of Bonhoeffer, Martin Luther, If You Can Keep It, Miracles, Seven Women, Seven Men, andAmazing Grace. His books have been translated into more than twenty-five languages. His writing has appeared in the Wall Street Journal, the New York Times, and the New Yorker, and Metaxas has appeared as a cultural commentator on CNN, Fox News, and MSNBC. He is the host of The Eric Metaxas Radio Show, a nationally syndicated daily show aired in 120 U.S. cities and on the Trinity Broadcasting Network. Metaxas is also the founder and host of Socrates in the City, the acclaimed series of conversations on "life, God, and other small topics," featuring Malcolm Gladwell, Francis Collins, Baroness Caroline Cox, and Dick Cavett, among many others. He is a senior fellow and lecturer at large at the King’s College in Manhattan, where he lives with his wife and daughter.

▼▲
I'm the author/artist and I want to review Discussing Mere Christianty--DVD and Participant's Guide.
Back
×
Back
×