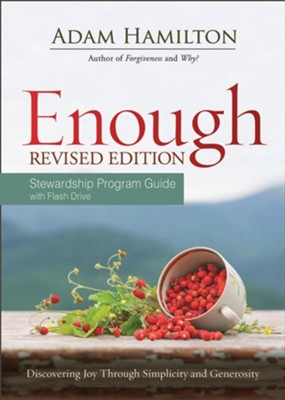 The Enough Stewardship Program from Adam Hamilton challenges Christians to reclaim a healthy biblical perspective on their money and possessions. Many church members are struggling to stay afloat financially and church budgets are suffering as well. Based on the book, Enough: Discovering Joy Through Simplicity and Generosity, the program offers a simple campaign that will transform how the church and individuals view the role of money in connection with their life's purpose and the impact that transformation will have on the world.

This Stewardship Program Guide with its accompanying Flash Drive contains everything you need to get started: a campaign timeline, sample communication letters, sermon notes, artwork for powerpoint presentaions, and signage. Participants will discover the keys to maintaining faith during a personal fiscal crisis, cultivating contentment, overcoming fear, and experiencing joy by living simply and generously.

Each small group will need one copy of the 4-session DVD, one Leader's Guide, and a book for each participant.

Church leaders are struggling to help their congregations respond to the violent ebb and flow of the economy. While their members are simply trying to stay afloat financially, the budget of their church is suffering as well. In the midst of all of this, though, there is God and a divine calling for each of us.

With Enough Stewardship Program Guide, Adam Hamilton offers a simple campaign that will transform how the church and individuals view the role of money in connection with their life’s purpose and the positive impact that transformation will have on the world.

This program, based on Enough: Discovering Joy Through Simplicity and Generosity, is designed for church-wide and small-group studies and includes:

▼▲
Adam Hamilton is senior pastor of The United Methodist Church of the Resurrection in Leawood, Kansas, one of the fastest growing, most highly visible churches in the country. The Church Report named Hamilton’s congregation the most influential mainline church in America, and he preached at the National Prayer Service as part of the presidential inauguration festivities in 2013.
Hamilton is the best-selling and award-winning author of Creed, Half Truths, The Call, The Journey, The Way, 24 Hours That Changed the World, John, Revival, Not a Silent Night, Enough, When Christians Get It Wrong, and Seeing Gray in a World of Black and White, all published by Abingdon Press. Learn more about Adam Hamilton at AdamHamilton.com.

▼▲
I'm the author/artist and I want to review Enough: Discovering Joy through Simplicity and Generosity, Stewardship Program Guide with Flash Guide.
Back
Back