Skip to main content
CYBER WEEK SALE: Up to 88% off, thru 12/6. >
Discovering Revelation: Content, Interpretation, Reception
By: David A. deSilva
Stock No: WW872425 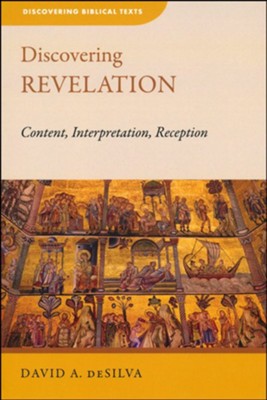 The book of Revelation has been received over the past several centuries with both fascination and aversion, but one thing is certain: it has profoundly shaped Christian history and culture. And the way it has shaped history and culture has been determined, in large part, by how the book has been variously—and sometimes irresponsibly—interpreted.

David A. deSilva addresses the interpretation and reception-history of Revelation in this compact, up-to-date, and student-friendly introduction to the book of Revelation, focusing on its structure, content, theological concerns, key interpretive debates, and historical reception. Discovering Revelation draws on a range of methodological approaches (author-, text-, and reader-centered) as complementary rather than mutually exclusive ways of interpreting the text. DeSilva pays special attention to defining features of Revelation, such as its use of sequences of seven as a major structuring device, its nonlinear plotline, and its deployment of contrast and parody. As deSilva writes, "A text as rich and multidimensional as Revelation calls for its readers to adopt a rich and multidimensional approach that draws upon a variety of interpretative angles and skills.".

▼▲
David A. deSilva is Trustees' Distinguished Professor of New Testament and Greek at Ashland Theological Seminary. His many other books include An Introduction to the New Testament, Introducing the Apocrypha, and Galatians: A Handbook to the Greek Text.

▼▲
I'm the author/artist and I want to review Discovering Revelation: Content, Interpretation, Reception.
Back
Back