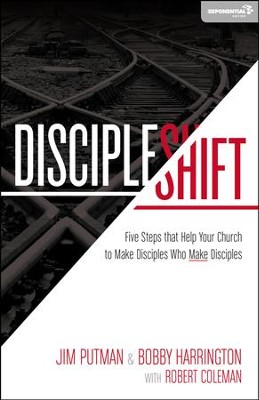 By: Jim Putman, Bob Harrington, Robert Coleman
Zondervan / 2013 / Paperback
5 out of 5 stars for DiscipleShift: Five Steps That Help Your Church to Make Disciples Who Make Disciples (5 Reviews) Write a Review
Buy 44 or more for $13.29 each.
In Stock
Stock No: WW492627

▼▲
For more than 30 years, church leaders in America have searched for different models for reaching unchurched people. From "attractional" models to "missional" models to "gospel-centered" models, each has strengths and weaknesses. While all of these approaches have merit, something is still missing, something fundamental to the mission of the church: discipleship.

Making disciples is the church's God-given mandate, but too often our churches fall short of their mission. We fill our pews but fail to create committed disciples. Discipleshift walks you through five key "shifts" that your church must make to refocus on the biblical mission of discipleship. These changes will attract the world and empower your church members to be salt and light in their communities.

Over the last thirty years, many influential church leaders and church planters in America have adopted various models for reaching unchurched people. An "attractional" model will seek to attract people to a local church. Younger leaders may advocate a more "missional" approach, in which believers live and work among unchurched people and intentionally seek to serve like Christ. While each of these approaches have merit, something is still missing, something even more fundamental to the mission of the church: discipleship.

Making disciples—helping people to trust and follow Jesus—is the church’s God-given mandate. Devoted disciples attract people outside the church because of the change others see in their Christ-like lives. And discipleship empowers Christians to be more like Christ as they intentionally develop relationship with non-believers.

DiscipleShift walks you through five key "shifts" that churches must make to refocus on the biblical mission of discipleship. These intentional changes will attract the world and empower your church members to be salt and light in their communities.


Bobby Harrington is the co-founder of discipleship.org and the founding and lead pastor of Harpeth Christian Church (19 years). He is the chairman of the board for the Relational Discipleship Network and the co-author of DiscipleShift, Dedicated: Training Your Children to Trust and Follow Jesus, and Discipleship that Fits. He has been married to Cindy for over 35 years and they have two adult children who are disciples of Jesus.


Dr. Robert Coleman is the Distinguished Senior Professor of Discipleship and Evangelism at Gordon-Conwell seminary and a prolific author, having written hundreds of articles and twenty-one books, including The Master Plan of Evangelism, which has sold multiple million copies and is the book for which he is best known. He directed the School of World Mission and Evangelism at Trinity Evangelical Divinity School for eighteen years and currently serves on the Mission America Facilitation Committee and several international mission boards and is the president of Christian Outreach. From 1989-2001, he led the Institute of Evangelism in the Billy Graham Center at Wheaton College and served as Dean of the Billy Graham International Schools of Evangelism. He is also a founding member of the Lausanne Committee for World Evangelism and a past president of the Academy for Evangelism in Theological Education. His personal interests include spending time with his family, including his children and grandchildren, and keeping in touch with those he has discipled.