Skip to main content
BRING CHRISTMAS HOME SALE: Save up to 85% through 11/2 >
Disciples of All Nations: Pillars of World Christianity
By: Lamin O. Sanneh
Stock No: WW89612 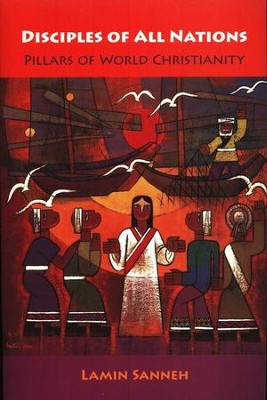 Disciples of All Nations: Pillars of World Christianity

▼▲
"One of this generation's most significant Christian intellectuals," Christianity Today says of the author. Here is the little-known story of how Christianity has become the dominant religion in a number of former Western colonies and in the process has transformed worship, interpretation of Scripture, and day-to-day practices. 368 pages, softcover.

▼▲
Long the dominant religion of the West, Christianity is now rapidly becoming the principal faith in much of the postcolonial world--a development that marks a momentous shift in the religion's very center of gravity. In this eye-opening book, Lamin Sanneh examines the roots of this
"post-Western awakening" and the unparalleled richness and diversity, as well as the tension and conflict, it has brought to World Christianity.

Tracing Christianity's rise from its birth on the edge of the Roman empire--when it proclaimed itself to be a religion for the entire world, not just for one people, one time, and one place--to its key role in Europe's maritime and colonial expansion, Sanneh sheds new light on the ways in which
post-Western societies in Africa, Asia, and Latin America were drawn into the Christian orbit. Ultimately, he shows, these societies outgrew Christianity's colonial forms and restructured it through their own languages and idioms--a process that often occurred outside, and sometimes against, the
lines of denominational control. The effect of such changes, Sanneh contends, has been profound, transforming not only worship, prayer, and the interpretation of Scripture, but also art, aesthetics, and music associated with the church. In exploring this story of Christianity's global expansion and
its current resurgence in the non-Western world, Sanneh pays close attention to such issues as the faith's encounters with Islam and indigenous religions, as well as with secular ideologies such as Marxism and nationalism. He also considers the challenges that conservative, non-Western forms of
Christianity pose to Western liberal values and Enlightenment ideas.

Here then is a groundbreaking study of Christianity's role in cultural innovation and historical change--and must reading for all who are concerned with the present and future of the faith.

▼▲
Lamin Sanneh, a naturalized U.S. citizen from Gambia and the scion of an ancient African royal house, was educated on four continents. He is Professor of History and World Christianity at Yale University, and chair of its Council on African Studies. His books include Whose Religion is Christianity?:
The Gospel Beyond the West and The Changing Face of Christianity: Africa, the West, and the World (coedited with Joel A. Carpenter).

▼▲
The first in the "Oxford Studies in World Christianity" series, which should fill gaps in the scholarly publication landscape, this volume delivers not the truly "groundbreaking study" it promises but an able treatment nonetheless of a much-neglected topic. Sanneh, a Yale professor and author of several books on related subjects, including Whose Religion Is Christianity? The Gospel Beyond the West, smartly considers Christianity in what he terms "its current post-Western phase," having developed in many regions without the influence of, for example, scholarly traditions (Sanneh himself perhaps mirrors this in his introduction, where he uncritically equates the character of Peter in Acts with Peter the historical figure). Sanneh is at his best in presenting more recent history, particularly that of missionary activity over the last several centuries in the Arab world, the Americas, Africa, and China. Last but not least, he eschews the easy categorization of evangelistic relations, instead "problematizing" the simplistic correlation of missionary activity to colonizing power. Recommended for larger and/or more subject-focused collections.-Darby Orcutt, North Carolina State Univ. Libs., Raleigh

▼▲
"Disciples of All Nations offers extraordinary insights into world Christianity today."--Journal of the American Academy of Religion

"I am lost in admiration for Lamin Sanneh's magnificent study of world Christianity, for the work's geographical scope and historical sweep, and for the breadth of the author's learning. Throughout, Sanneh asks the critical question: how can we reconceive Christianity in a way that frees it from its
European and imperial contexts, permitting the faith to adapt to the kaleidoscopic realities of different societies around the globe. This is a splendid achievement." --Philip Jenkins, author of The Next Christendom and The New Faces of Christianity
"Been looking for a solid read on the historical advancement of Christianity through the work of missions? Then look no further." --Evangelical Missions Quarterly
"...this work is an historical tour de force, throughout which Sanneh's pastoral voice inspires readers to embrace Christianity's 'peculiar temper' and resulting indigenous articulations. It thus merits warm recommendations, even if not as splendid as anticipated due to its uneven coverage."--
Jayson George, Brethren International
"Disciples of all Nations...is written with exquisite elegance and uncommon grace..."--Peter C. Phan

▼▲
I'm the author/artist and I want to review Disciples of All Nations: Pillars of World Christianity.
Back
Back