Skip to main content
WINTER BIBLE SALE: Over 1,200 Deals Up to 80% Off, thru 2/1. Shop Now >
Hell Hath No Fury: Gender, Disability, and the Invention of Damned Bodies in Early Christian Literature
By: Meghan R. Henning
Stock No: WW0223118 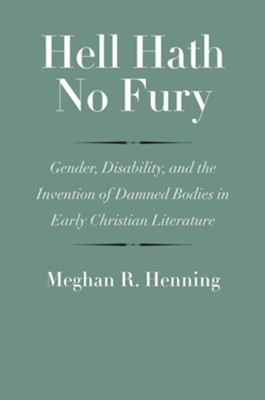 Hell Hath No Fury: Gender, Disability, and the Invention of Damned Bodies in Early Christian Literature

Throughout the Christian tradition, descriptions of hell’s fiery torments have shaped contemporary notions of the afterlife, divine justice, and physical suffering. But rarely do we consider the roots of such conceptions, which originate in a group of understudied ancient texts: the early Christian apocalypses.

In this pioneering study, Meghan Henning illuminates how the bodies that populate hell in early Christian literature—largely those of women, enslaved persons, and individuals with disabilities—are punished after death in spaces that mirror real carceral spaces, effectually criminalizing those bodies on earth. Contextualizing the apocalypses alongside ancient medical texts, inscriptions, philosophy, and patristic writings, this book demonstrates the ways that Christian depictions of hell intensified and preserved ancient notions of gender and bodily normativity that continue to inform Christian identity.

▼▲
Meghan R. Henning is associate professor of Christian origins at the University of Dayton. She is the author of Educating Early Christians Through the Rhetoric of Hell.

▼▲
"Few works written recently are as enthralling, engaging, and challenging as Henning’s work on hellscapes and their inhabitants. She has successfully given hell the right sort of attention, at last filling a major gap in the story and simultaneously charting new territory."—Jarel Robinson-Brown, Los Angeles Review of Books

"This groundbreaking study provides the most erudite introduction to Christian hell to date, even as it elevates the scholarly conversation about the underworld to new heights of sophistication. Lucid, impeccably researched, and theoretically informed, this book is not only essential reading for anyone interested in the afterlife; it revolutionizes our understanding of Christian theories of punishment and embodiment from antiquity to the present day."—Candida Moss, University of Birmingham

"Meghan Henning immerses the reader in the depths of early Christians’ hell, in the company of sinners, saints, and most notably Christ’s mother. The tormented bodies on display show a remarkable resemblance to the world Christians inhabited and their judgments about bodies, male and female, able and disabled. Provocative and engrossing."—Harold Attridge, Yale Divinity School

"Meghan Henning’s analysis of early Christian hellscapes breaks entirely new ground. This is a fascinating read for anyone interested in the imaginations of the afterlife, then and now."—Jan N. Bremmer, University of Groningen

"Troubling the line between the literary and the real, Henning decisively shows the interplay in ancient thinking between imagined bodies in hell and non-normative bodies on earth—a formidable advance in our understanding of early Christian speculation on what it means to be human."—Ben Dunning, Fordham University

▼▲
I'm the author/artist and I want to review Hell Hath No Fury: Gender, Disability, and the Invention of Damned Bodies in Early Christian Literature.
Back