Diplomacy and Diamonds: My Wars from the Ballroom to the Battlefield - eBook
By: Joanne King Herring, Nancy Dorman-Hickson 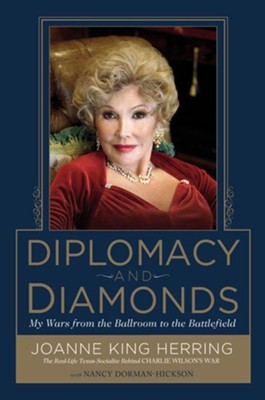 Diplomacy and Diamonds: My Wars from the Ballroom to the Battlefield - eBook

▼▲
She's been dirt poor; she's been filthy rich. Rich was more fun. She married three times, divorced twice, found her true love, and lost him to cancer. At twenty-one, she was told she would soon die. She lived. Doctors said she'd never be able to have children. She had 'em. She's bargained with God, dictators, and Democrats. She's partied with princes, presidents, premiers, Barbara Walters, Anwar Sadat, Margaret Thatcher, Tom Hanks, and Francisco Franco . . . though not all at the same time. She captivated powerful men with her feminine charm, and then persuaded them toward unlikely political alliances through her formidable intelligence. She waltzed with Prince Philip in Buckingham Palace, dressed in men's clothes and smuggled herself in a barrel across the Pakistani border, threw a Roman-themed party so extravagant it was featured in Life magazine, and survived a Soviet gunship attack in the mountains of Afghanistan.

Joanne Herring, the Houston socialite portrayed by Julia Roberts in the film Charlie Wilson's War, is far more colorful, funny, and likable than any screenwriter could have guessed. The former Texas television anchor is known for her improbable fight with the mujahideen against the former Soviet Union. But her full story-with all its God, guns, and Gucci glory-has never been told. Born in the man's world of Texas in a time when women had limited choices, Joanne Herring blazed a trail with allies as unlikely as Charlie Wilson, Pierre Cardin, and President Ronald Reagan . . . and in so doing forged new paths for women in Pakistan, Afghanistan, and America.

▼▲
I'm the author/artist and I want to review Diplomacy and Diamonds: My Wars from the Ballroom to the Battlefield - eBook.
Back
×
Back
×