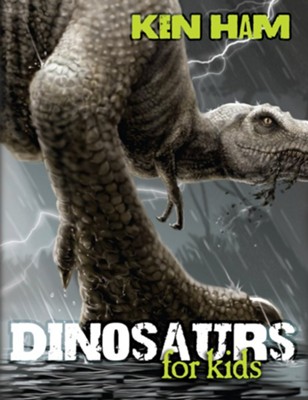 ▼▲
What should you do when a secular scientist talks about dinosaurs?
Why not ask 'Were you there?"
Why didn't the animals eat each other on the ark?
Perhaps God told them not to!

Dinosaurs for Kids is filled with computer-animated illustrations that accompany Ken Ham's fascinating explanation of dinosaurs. Firmly instructing children that an old-earth timetable and evolution are false, he clearly and candidly breaks through the confusion that can come from reading conflicting accounts of early earth history. Following the "ages" of dinosaurs: formed, fearless, fallen, flood, faded, found, & fiction, kids will see how dinosaurs walked with people, only grew violent after sin, survived the flood, and can only be rightly understood by those who have the truth! 64 pages, hardcover.

Peek inside a dinosaur egg, discover what dinosaurs really ate, and learn how dinosaur tracks are made - all in this awesomely illustrated book!

Dinosaurs for Kids shares the unique world of dinosaurs and their true history like never before as you:

Within these pages kids will uncover the facts about dinosaur history from the Creation to recent discoveries. Let Ken Ham take you on a journey through time to explore these awesome wonders of God's design. From where dinosaurs lived to what scientists assume they know about these great creatures, dinosaurs have never been this exciting, revealing and simply amazing!

▼▲
In Dinosaurs for Kids, by Ken Ham, vivid descriptions and detailed pictures encourage readers to move on to the next page. Every dinosaur imaginable is explained with its Latin name and meaning. The author divides the book into 7 chapters: Formed, Fearless, Fallen, Flood, Faded, Found, and Fiction. Each chapter starts with a picture and paragraph showing the main elements of the new chapter. Every chapter includes Fast Facts, amazing pictures, and explanations that paint an image in the readers mind.

This book includes a fully explained account of the creation days. Bible verses are included as appropriate (Psalm 147:5, 1 Timothy 1:12, 2 Samuel 7:27, Colossians 2:3). The author also includes a short prayer to pray if the readers want to become Christians. I highly recommend this book for girls and boys from ages 8-12, or anyone curious about dinosaurs and the Bible. -- Lauren Oliver, age 9, www.ChristianBookPreviews.com