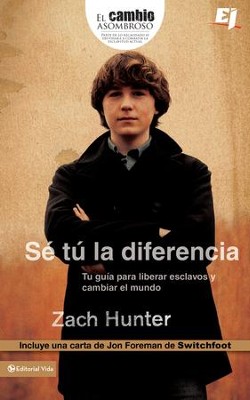 ▼▲
Watch the news and you'll find plenty of things wrong with our planet-homelessness hunger, global warming, AIDS . . . the list goes on and on. What could one teenager possibly do about them? Plenty. Just ask Zach Hunter, a modern-day abolitionist who is proving that one person-yes, you!-can make a difference.
There are more people bound in slavery now than at any time in history. Since the age of twelve, Zach has worked to free these men, women, and children who are being held against their will. He's even found some friends in the fight, including Jon Foreman of Switchfoot and Leeland Mooring of Leeland. In this newly updated and expanded edition of Be the Change, Zach features new stories of emerging abolitionists, provides updates on his organization, Loose Change to Loosen Chains, and shares practical advice to help you make revolutionary changes in the world.

▼▲
Abolitionist Zach Hunter challenges people to fix the world in Be the Change. Hunter calls for more than the end of modern-day slavery; he urges readers to make a difference wherever they see a problem, be it hunger, AIDS, or racism. He proves that anyone can help remedy the ills of society.

Each chapter highlights a quality that world-changers need, such as courage, compassion, and endurance. Hunter bolsters his explanations with inspiring examples from the past, referencing William Wilberforce, Rosa Parks, and Winston Churchill. He adds to these the stories of modern-day slaves from around the globe. At the end of every chapter are questions that will focus the readers thoughts and lead him a step closer to taking action.

Underneath everything Hunter writes is the truth of Proverbs 31:8-9: "Speak up for those who cannot speak up for themselves, for the rights of all who are destitute. Speak up and judge fairly, defend the rights of the poor and needy."

Hunter, now 19, began his crusade to free the earth's 27 million slaves at the age of 12. Since then, he has spoken to hundreds of thousands of people, raising awareness with his organization Loose Change to Loosen Chains.

Hunter writes in a conversational tone, though his voice is sometimes plain. The stories that fill his book are fascinating, but short. Nonetheless, Be the Change is a practical guide to fulfilling a passion for justice and reform. Mark Glenchur, www.ChristianBookPreviews.com