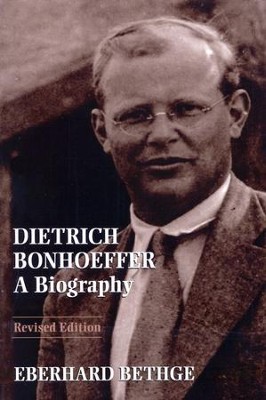 ▼▲
(PUBFortress)Widely regarded as the definitive biography. Bethge, a close friend and relative of Bonhoeffer, also edited Ethics and Letters & Papers from Prison. Now the translation has been carefully revised by Barnett, who incorporates hundreds of corrections, as well as adds sections previously omitted. 912 pages, softcover.

At a time when much of the world was either enticed with or entrapped by fascism, Dietrich Bonhoeffer dared to live the morally responsible Christian life to its most expressive, and tragic, end. As a theologically rooted opponent to National Socialism, and later as a member of the political resistance against Nazism, Bonhoeffer was recognized as a leader even by his enemies and was hanged by the Gestapo in 1945. His legacy has inspired many and has demonstrated his landmark life and works to be among the most important of the twentieth century and the most relevant for our times ahead.

This celebrated biography of Dietrich Bonhoeffer by Eberhard BethgeBonhoeffer's friend, pupil, close associate and relative by marriagehas been fully reviewed, corrected, and clarified by leading Bonhoeffer scholar Victoria Barnett for this new edition of the classic and definitive work. With previous sections updated and expanded, and entirely new sections on Bonhoeffer's childhood never before seen in English, this edition is sure to be the most accurate and inspiring textual rendering of Bonhoeffer to date.

Eberhard Bethge was an assistant to Dietrich Bonhoeffer from 1935 to 1940 at the Finkenwald Seminary and other places. He was a close friend and relative. He was also editor of the German edition of Bonhoeffer's collected works, now being published in translation by Fortress Press.

Victoria J. Barnett served from 2004-2014 as one of the general editors of the Dietrich Bonhoeffer Works, the English translation series of Bonhoeffer's complete works published by Fortress Press. She has lectured and written extensively about the Holocaust, particularly about the role of the German churches. Her published works include Bystanders: Conscience and Complicity during the Holocaust (1999) and For the Soul of the People: Protestant Protest against Hitler (1992). Since 2004 she has directed the Programs on Ethics, Religion, and the Holocaust at the United States Holocaust Memorial Museum. She is a graduate of Indiana University, Union Theological Seminary, New York, and George Mason University.

▼▲
I'm the author/artist and I want to review Dietrich Bonhoeffer: A Biography, Revised.
Back
Back