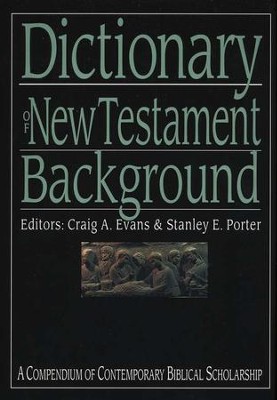 ▼▲
The final volume in InterVarsity's landmark Dictionary series! A library of scholarship in summary form, this study encompasses the full scope of Jewish and Greco-Roman cultures, and features articles on such topics as the Dead Sea Scrolls and second-temple Jewish writings. Extensive bibliographies and cross-references to other volumes in the series makes this an indispensable resource. 1060 pages, hardcover.

▼▲
Craig A. Evans (PhD, Claremont) is an internationally known and respected New Testament scholar, apologist and author who serves as the John Bisagno Distinguished Professor of Christian Origins at Houston Baptist University. He has written extensively on the historical Jesus and the Jewish background of the New Testament era. A prolific writer, Evans has published more than seventy books and over 500 journal articles and reviews, and his books have been translated into several languages. His academic and popular books include , , , (co-authored with N. T. Wright), , (in the Word Biblical Commentary) and . His edited volumes include , and . Evans has lectured at several prominent universities and seminaries around the world, including Cambridge, Durham and Oxford in the United Kingdom, Princeton and Yale in the United States, and Hebrew University and Ben Gurion University in Israel. Uniquely skilled to communicate biblical scholarship through the media, Dr. Evans has reaffirmed the uniqueness and supremacy of Jesus Christ to millions of people on television, radio and in print media including , , , , , , , and . In addition, he served as consultant for television miniseries, viewed by over 100 million Americans. Stanley E. Porter (Ph.D., University of Sheffield) is president, dean and professor of New Testament at McMaster Divinity College in Hamilton, Ontario. He is the author of numerous studies in the New Testament and Greek language, including and He has also edited volumes such as and

▼▲
I'm the author/artist and I want to review Dictionary of New Testament Background: A Compendium of Contemporary Biblical Scholarship.
Back
×
Back
×