Diary of a Jackwagon - eBook
By: Tim Hawkins 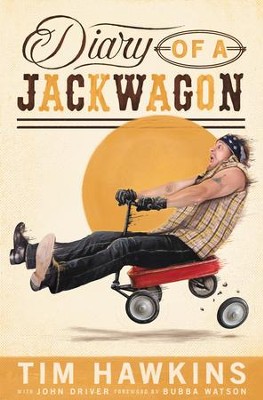 Diary of a Jackwagon - eBook

He’s a comedian. He’s a YouTube sensation. And now he becomes an author. Best known for his song parodies and riffs on yoga pants and homeschooling, Tim Hawkins now shares his perspective on life in the 21st century in his long-awaited debut book. Tim's topics are as wide-ranging as his stand-up comedy including marital communications ("Marriage needs a challenge flag, like in pro football"), worship music ("Pick the right key, because I’m not Barry White and I’m not a Bee Gee"), and food ("Eating a Krispy Kreme donut is like eating a baby angel"). Diary of a Jackwagon reveals a witty and relatable voice reminding readers that for life’s many difficulties, laughter is always the best medicine – when there aren’t any pills left.

Tim Hawkins has forged a no-bones, no-bull comedy experience that entertains the entire family. Described as one part gifted and two parts twisted, Tim combines hilarious stand-up plus musical mastery to highlight the brokenness of human nature while marveling in its absurdity. He performs live for 200,000 fans at 120+ sold-out shows in 30+ states every year. His Jackwagon Crew continues to grow into a gut-busting revolution of multi-generational proportions with 300 million views on YouTube and a motley half million Facebook fans. Tim and his wife Heather live in Missouri with their four crud muffins.

John Driver is an award-winning writer who has authored, coauthored, or served as the primary collaborative writer for more than twenty books. An alumnus of the University of Tennessee, he currently resides with his wife, Laura, and daughter, Sadie, in Mount Juliet, Tennessee, just outside Nashville. He serves as the Executive and Teaching Pastor at the Church At Pleasant Grove and hosts the weekly podcast Talk About That.

▼▲
I'm the author/artist and I want to review Diary of a Jackwagon - eBook.
Back
×
Back
×