The Wait Devotional: Daily Inspirations for Finding the Love of Your Life and the Life You Love
By: DeVon Franklin, Meagan Good 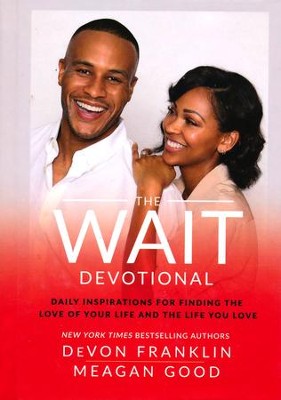 The Wait Devotional: Daily Inspirations for Finding the Love of Your Life and the Life You Love

▼▲
In The Wait, DeVon Franklin and Meagan Good, a Hollywood power couple who famously saved sex for marriage, share the life-changing message that waiting--rather than rushing--can be the key for finding the person you're meant to be with. Whether you're waiting for the right person to come along or you're searching for the strength to put intimacy on hold, The Wait Devotional can help you slow down and trust in God's perfect timing, day by day. Hardcover.

▼▲
A daily devotional based on the New York Times bestselling The Wait, filled with inspiring readings about how having the patience to wait for God’s best—instead of grasping for what you want right now—can transform your life.

In The Wait, DeVon Franklin and Meagan Good, a Hollywood power couple who famously saved sex for marriage, shared the life-changing message that waiting—rather than rushing—can be the key for finding the person you’re meant to be with.

Now, their powerful message is reflected again in The Wait Devotional. Filled with scripture, prayers, and DeVon and Meagan’s trademark conversational style, this 90-day devotional is packed with real-time advice for men and women trying to successfully navigate the ins and outs of dating, love, and relationships. You’ll discover how waiting for everything—from sex to getting engaged—can transform your entire life by giving you greater patience, joy, peace, healing, faith, and love.

Whether you’re waiting for the right person to come along or you’re searching for the strength to put intimacy on hold, The Wait Devotional can help you slow down and trust in God’s perfect timing, day by day.

▼▲
DeVon Franklin is an award&shy;–winning film & TV producer, bestselling author, renowned preacher and spiritual success coach. DeVon is the ultimate multi-hyphenate. With a commitment to uplifting the masses through entertainment, Franklin has quickly become a force in the media as well as a leading authority on faith, spiritual wellness and personal development. Beliefnet has called him one of the "Most Influential Christians Under 40," Variety Magazine named him one of the "Top 10 Producers to Watch," Ebony Magazine has distinguished him as one of the "Top 100 Influential African-Americans in America," and even Oprah has called him "a bonafide dynamo...a different kind of spiritual teacher for our times." Franklin serves as President/CEO of Franklin Entertainment, a dynamic multimedia entertainment company with a first-look film deal at 20th Century Fox. As a filmmaker, Franklin is producing the inspirational true story Breakthrough starring Chrissy Metz in theaters Easter of 2019. Additionally, he produced the hit animated film The Star and the hit film Miracles from Heaven. Along with his work as a producer, Franklin is the author of the upcoming book The Truth About Men, to be published in February 2019, as well as The Hollywood Commandments, New York Times bestseller The Wait (co-written with his wife, award–winning actress Meagan Good) and Produced by Faith.

▼▲
I'm the author/artist and I want to review The Wait Devotional: Daily Inspirations for Finding the Love of Your Life and the Life You Love.
Back
×
Back
×