Skip to main content
Get Christmas Ready Sale — Over 1,000 deals thru 9/26!
The Destruction of the Canaanites: God, Genocide, and Biblical Interpretation
By: Charlie Trimm
Stock No: WW879620 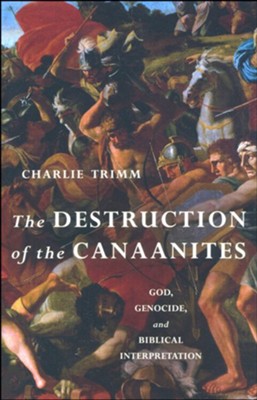 The Destruction of the Canaanites: God, Genocide, and Biblical Interpretation

When Joshua led the Israelites into the Promised Land, he was told to destroy the Canaanites as well as their culture. Yet, how can a good God command genocide, and how are we to make sense of one of the Bible’s most difficult ethical problems? In The Destruction of the Canaanites, Charlie Trimm evaluates this topic from every conceivable angle: Who were the Canaanites, and what do we know about them? How should one understand the nature of warfare in the ancient world? When is an event considered genocide? He then provides four possible approaches to reconciling biblical violence.

How can a good God command genocide?

In this short, accessible offering, Charlie Trimm provides the resources needed to make sense of one of the Bible’s most difficult ethical problems—the Israelite destruction of the Canaanites as told in the books of Deuteronomy, Joshua, and Judges.

Trimm begins with a survey of important background issues, including the nature of warfare in the ancient Near East, the concept of genocide (with perspectives gleaned from the field of genocide studies), and the history and identity of the Canaanite people. With this foundation in place, he then introduces four possible approaches to reconciling biblical violence:

The depth of material provided in concise form makes Trimm’s book ideal as a supplementary textbook or as a primer for any Christian perturbed by the stories of the destruction of the Canaanites in the Old Testament.

▼▲
Charlie Trimm is associate professor of biblical and theological studies at Talbot School of Theology, Biola University. He is the coauthor, with Brittany Kim, of Understanding Old Testament Theology and the author of Fighting for the King and the Gods: A Survey of Warfare in the Ancient Near East and "YHWH Fights for Them!": The Divine Warrior in the Exodus Narrative.

▼▲
"Anyone who has read the Old Testament attentively knows that its pages perform many acts of brutalizing God-willed savagery. This linkage of God and violence is, on any reading, deeply problematic and troubling. Charlie Trimm has faced this issue honestly and without flinching. He seeks to sort out different possible avenues of interpretation. The outcome is that his book is a difficult but nonetheless important read, for our own reading context is now one of acute and pervasive violence. The issue is deep and insistent and will not go away. Trimm invites us to think again in ways that are both honest and faithful."
— Walter Brueggemann
Columbia Theological Seminary

"Charlie Trimm’s The Destruction of the Canaanites takes some very difficult verses from the Old Testament and deals with them in an intellectually and theologically fair-minded way. Trimm presents different views in an even-handed manner, mentioning their strengths and weaknesses, all the while staying away from one-sided advocacy. He doesn’t tell readers how to think; he gives them different, competing views that allow them to think for themselves and to discuss with others. Too often Christians want to shut debates down; Charlie Trimm wants to elevate them, and in this book he does."
— Peter Wehner
senior fellow at the Ethics and Public Policy Center
contributor to The New York Times and The Atlantic
former White House senior adviser

"One of the greatest challenges facing contemporary Christians who hold to a high view of Scripture is to give a plausible account of its violent depictions of God, and there is no depiction of God within the canon that is more problematic than the depiction of God ordering the genocide of various groups of Canaanites. In this well-researched and easy-to-read work, Charlie Trimm carefully and fairly reviews all the major scholarly proposals that attempt to address this problem, leaving it up to readers to decide for themselves which proposal they think is most compelling. Anyone who is disturbed by the violent depictions of God in Scripture (and how could any follower of Jesus not be?) will find much to chew on in this informative and engaging work."
— Gregory A. Boyd
senior pastor of Woodland Hills Church, Saint Paul, Minnesota
author of Inspired Imperfection: How the Bible's Problems Enhance Its Divine Authority

"This review of major voices in the discussion of a timely topic provides the reader with valuable perspectives to consider the question. Everyone interested in the theological issue of the violence of the biblical God, especially in the wars with the Canaanites, will benefit by reading this work."
— Richard S. Hess
Denver Seminary

"This is a learned and thoughtful discussion. In an area where there is usually much heat Trimm increases the light."
— R. W. L. Moberly
Durham University

"Drawing on his expertise on warfare in the ancient Near East, Trimm outlines and critiques common approaches to this vexing ethical issue and considers their implications. Trimm does not offer a solution to the problem. Instead, he astutely lays the groundwork for a robust classroom discussion in which students can wrestle with the issues and develop their own approach to the problem of violence in the Old Testament."
— Carmen Joy Imes
Biola University

"This excellent volume takes an honest, hard look at the ways in which biblical scholars have tried to explain the moral challenge posed by the stories of the conquest of Canaan in the Bible. No easy solutions are offered, but the reader will come away with a far better grasp of the nature of the problem."
— Gary A. Anderson
University of Notre Dame

"If you are overwhelmed not only by the ethically problematic nature of the Canaanite conquest but also by the number (and size!) of books written on the topic, start here with Trimm’s short and accessible Destruction of the Canaanites. Trimm helpfully provides background on the ancient context, on the concept of genocide, and on the identity of Canaanites, before carefully working through possible interpretational solutions to the problem. I’m confident that readers will greatly appreciate, as I did, Trimm’s wisdom and perspective on this difficult subject."
— David T. Lamb
Missio Seminary

"Here is an honest engagement with one of the longstanding ethical problems raised by the Bible, marked by dialogue among diverse perspectives, fair assessment of their strengths and weaknesses, and an invitation for readers to join an ongoing conversation whose conclusions have not been predetermined. The book reads like a class discussion guided by a wise teacher committed to generous, multiperspectival dialogue. Trimm’s attention to the realities of ancient warfare, the historical Canaanites, and modern genocide studies adds a depth rarely seen in similar treatments, even as the book’s brevity makes it a usable primer to resource a more extensive—and still all-too-needed—discussion about God, violence, and the Bible."
— Brad E. Kelle
Point Loma Nazarene University

▼▲
I'm the author/artist and I want to review The Destruction of the Canaanites: God, Genocide, and Biblical Interpretation.
Back
Back