Skip to main content
WINTER BIBLE SALE: Over 1,200 Deals Up to 80% Off, thru 2/1. Shop Now >
The Destiny of Israel And The Church: Understanding the Middle East Through Biblical Prophecy - eBook
By: Derek Prince
Stock No: WW86980EB 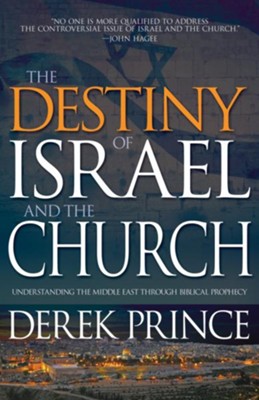 The Destiny of Israel And The Church: Understanding the Middle East Through Biblical Prophecy - eBook

▼▲
Israel is at the center of a powerful clash of forces, but God has established firm covenants with both Israel and the church. The only reliable source of light upon the situation in the Middle East is provided by God’s prophetic Word. If we do not seek the light that comes from this source, we will inevitably find ourselves in the dark, subject to confusion and deception.

The church had its origin within Israel, but over the centuries the destinies of the two groups have diverged widely—until now. An exciting feature of our time is that the destinies of Israel and the church are once again beginning to converge. This God-ordained convergence will produce the most dramatic and significant developments in all of human history.

In The Destiny of Israel and the Church, renowned Bible teacher Derek Prince explores the answers to these questions, and more:

▼▲
Derek Prince (1915–2003) was born in Bangalore, India, into a British military family. He was educated as a scholar of classical languages at Eton College and Cambridge University in England and later at Hebrew University, Israel. As a student, he was a philosopher and self-proclaimed agnostic.
While serving with the Royal Army Medical Corps (RAMC) during World War II, Prince began to study the Bible as a philosophical work. Converted through a powerful encounter with Jesus Christ, he was baptized in the Holy Spirit a few days later. This life-changing experience altered the whole course of his life, which he thereafter devoted to studying and teaching the Bible as the Word of God.

Internationally recognized as a Bible scholar and spiritual patriarch, Derek Prince taught and ministered on six continents for more than sixty years. Until a few years before his death at the age of 88, he traveled the world, imparting God’s revealed truth, praying for the sick and afflicted, and sharing his prophetic insights into world events in the light of Scripture. He is the author of over eighty books, six hundred audio teachings, and one hundred video teachings, many of which have been translated and published in more than one hundred languages. He pioneered teaching on such groundbreaking themes as generational curses, the biblical significance of Israel, and demonology.

Derek Prince Ministries, with its international headquarters in Charlotte, North Carolina, continues to distribute his teachings and to train missionaries, church leaders, and congregations through its worldwide national offices. It is estimated that Derek Prince’s messages have reached more than half the globe through his books, CDs, and daily radio program, which is now known as Derek Prince Legacy Radio. In 2002 he said, "It is my desire—and I believe the Lord’s desire—that this ministry continue the work, which God began through me over sixty years ago, until Jesus returns."

▼▲
I'm the author/artist and I want to review The Destiny of Israel And The Church: Understanding the Middle East Through Biblical Prophecy - eBook.
Back
Back