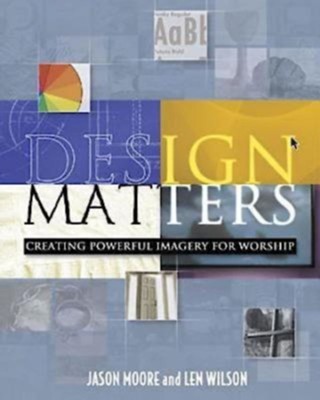 ▼▲
Many churches use visual technology in worship. Yet simply adding a screen and projector in a sanctuary doesn't automatically translate into growth and revitalization. This book helps worship-screen producers learn to "speak" a visual language. These time-tested design principles provide a basic framework for developing a visual literacy. The accompanying DVD includes graphic tutorials for creating art in Adobe Photoshop/Elements, time-saving techniques for achieving special effects, and helpful websites.

To view a sample of the DVD, click here.
To view the Midnight Oil seminar schedule, click here.

▼▲
Jason Moore runs Midnight Oil Productions and is formerly a co-founder of Lumicon Digital Productions in Dallas, Texas. He has previously worked as a graphic and animation artist at the Ginghamsburg United Methodist Church in Ohio.

Len Wilson and Jason Moore have co-authored several books, including Design Matters: Creating Powerful Imagery for Worship (Abingdon Press, 2006), Digital Storytellers: The Art of Communicating the Gospel in Worship (Abingdon, 2002) and The Wired Church: Making Media Ministry (Abingdon, 1999). They have been featured in several articles for publications including Clergy Journal, The Ooze, Homiletics, Next Wave, Rev., Technologies for Worship, Wired, Worship Matters, Your Church, Church and Worship Technology, and various newspapers around North America. Their digital productions from Ginghamsburg and Lumicon have received several Telly Awards for excellence in video production.
Len Wilson is an author, speaker, and advocate for creativity in faith and life. He is known for his pioneering work in visual storytelling and has consulted with organizations and ministries across the country. Len is the author or co-author of ten books, has been featured in dozens of articles for major religious periodicals, and has acquired leadership books for Abingdon Press, a division of the United Methodist Publishing House. He currently serves as Creative Director at Peachtree, a large church in Atlanta, Georgia. Follow Len at lenwilson.us or on Twitter at @Len_Wilson.

▼▲
I'm the author/artist and I want to review Design Matters: Creating Powerful Imagery for Worship - eBook.
Back
×
Back
×