Out of the Depths: An Unforgettable WWII Story of Survival, Courage, and the Sinking of the USS Indianapolis - eBook
By: Edgar Harrell, David Harrell 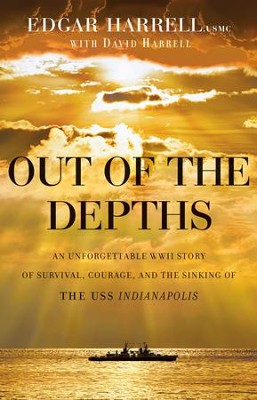 Out of the Depths: An Unforgettable WWII Story of Survival, Courage, and the Sinking of the USS Indianapolis - eBook

July 30, 1945--The USS Indianapolis and its 1,196-man crew is making its way toward a small island in the South Pacific. The ship is sailing unescorted, assured by headquarters the waters are safe. It is midnight, and Marine Edgar Harrell and several others have sacked out on deck rather than spend the night in their hot and muggy quarters below. Fresh off a top-secret mission to deliver uranium for the atomic bombs that would ultimately end World War II, they are unaware their ship is being watched. Minutes later, six torpedoes are slicing toward the Indy . . .

For five horrifying days and nights after their ship went down, Harrell and his shipmates had to fend for themselves in the open seas. Plagued by dehydration, exposure, saltwater poisoning, and shark attacks, their numbers were cruelly depleted before they were miraculously rescued. This is one man's story of courage, ingenuity, and faith in God's providence in the midst of the worst naval disaster in U.S. history.

▼▲
Edgar Harrell, USMC (Ret.), owned and operated a distributorship for the Pella Window Company in Rock Island, Illinois, for thirty-five years, served for fifteen years on the board of Moody Bible Institute, and has been a lay minister throughout his adult life. He lives in Clarksville, Tennessee, with his wife, Ola, enjoying their two children, eight grandchildren, and eight great-grandchildren. Edgar speaks extensively around the United States about his survival at sea. Learn more at www.indysurvivor.com.

David Harrell is currently the senior pastor-teacher of Calvary Bible Church (www.cbctn.org), where he has served since 1997. His Bible expositions are heard and read regularly around the world over the Internet and broadcasted over the radio. He is also the president of Olive Tree Christian Resources (www.otcr.org), which serves as the media arm of Calvary Bible Church, committed to the creation and distribution of Christian books, expository sermons, Internet and radio programming, websites for doctrinally sound evangelical churches, pastoral training, and church planting. After attending Moody Bible Institute, he graduated from Grace College, Grace Theological Seminary, and the Oxford Graduate School where he earned a Doctor of Philosophy degree in social research methods, which focuses on the sociological integration of religion and society. He is a former associate professor of Biblical Counseling at the Master's College, Santa Clarita, California. He is married to Nancy, and together they have three children and six grandchildren.

▼▲
I'm the author/artist and I want to review Out of the Depths: An Unforgettable WWII Story of Survival, Courage, and the Sinking of the USS Indianapolis - eBook.
Back
×
Back
×