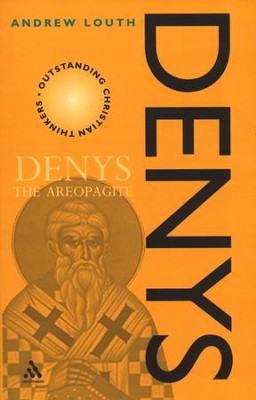 Sample Pages
Buy Item $47.44
In Stock
Quantity:
Stock No: WW45772X
Bloomsbury Academic / Paperback
Quantity:
Add To Cart
of These in Your Cart

▼▲
The writings ascribed to the Athenian convert of St. Paul, Denys (or Dionysius) the Areopagite, made their first appearance the early sixth century. Since then, through the Renaissance and beyond, they have exercised an enormous influence on Christian thought, both in the East and in the West. Yet who their author was remains in soluble mystery. This book explores Denys' theology, which draws both on the great Greek theologians of the fourth century - the Cappadocian Fathers - and on the stridently pagan philosophical tradition of late Athenian Neoplationism, as well as showing affinities with the Christian thought of Syria. In this comprehensive introduction, Andrew Louth explores Denys' theology, presenting a compelling vision of the beauty of God's revelation, joined with a profound awareness of the ultimate mystery of the unknowable God.

Andrew Louth examines all the traditions on which Denys' work draws: the Fourth Century Greek theologians, pagan philosophy and Syrian Christian thought. The corpus of Denys the Areopagite appeared in the sixth century and have since been deeply influential on Christian thinking both in East and West. Who their author was remains a mystery but in this book Professor Louth documents and comments on his compelling vision of the beauty of God's world and his revelation, together with his profound awareness of the ultimate mystery of the unknowable God who utterly transcends all being.

▼▲
I'm the author/artist and I want to review Denys the Areopagite.
Back
×
Back
×