EARLY CHRISTMAS SALE: Shop over 900 items up to 85% off through 9/29 >
Denmark Vesey: The Buried Story of America's Largest Slave Rebellion and the Man Who Led It - eBook
By: David Robertson 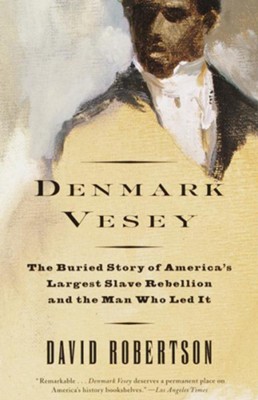 Denmark Vesey: The Buried Story of America's Largest Slave Rebellion and the Man Who Led It - eBook

▼▲
Denmark Vesey was a charismatic ex-slave who had purchased his own freedom in 1800 with winnings from a lottery ticket. Inspired by the success of the revolutionary black republic in Haiti, he persuaded some 9,000 slaves that freedom was theirs if they acted boldly. When his uprising was betrayed, Vesey and his 77 followers were promptly executed, the matter was further hushed up by Charleston's white leaders. Compelling, informative and often disturbing, this book brings readers closer to a seminal hero in the struggle against slavery. 202 pages, softcover.

▼▲
In a remarkable feat of historical detective work, David Robertson illuminates the shadowy figure who planned a slave rebellion so daring that, if successful, it might have changed the face of the antebellum South. This is the story of a man who, like Nat Turner, Marcus Garvey, and Malcolm X, is a complex yet seminal hero in the history of African American emancipation.

Denmark Vesey was a charasmatic ex-slave--literate, professional, and relatively well-off--who had purchased his own freedom with the winnings from a lottery. Inspired by the success of the revolutionary black republic in Haiti, he persuaded some nine thousand slaves to join him in a revolt. On a June evening in 1822, having gathered guns, and daggers, they were to converge on Charleston, South Carolina, take the city's arsenal, murder the populace, burn the city, and escape by ship to Haiti or Africa. When the uprising was betrayed, Vesey and seventy-seven of his followers were executed, the matter hushed by Charleston's elite for fear of further rebellion. Compelling, informative, and often disturbing, this book is essential to a fuller understanding of the struggle against slavery.

▼▲
David Robertson is the author of a biography of James F. Byrnes and Booth: A Novel. He lives in La France, South Carolina.

▼▲
"A fascinating historical detective story . . . Robertson deftly teases out tantalizing clues without pushing his speculation too far . . . [His] thoughtful chronicle restores to the record a powerful figure whose story continues to challenge America's vision of itself as a place of equality and harmony."
--Kirkus Reviews

"This book is truly something new . . . Robertson is a dogged seeker of truth with a fertile imagination . . . He disinters the secret of those who needed to bury Vesey's outrage and thereby deflect the light from their outrageous treatment of people they made slaves." --Booklist

"Robertson's well-researched narrative and smooth style make this an intelligent analysis of, as well as a worthy tribute to, his subject." --Publishers Weekly

"Excellent. It should not be missed by anyone." --The Baltimore Sun

▼▲
I'm the author/artist and I want to review Denmark Vesey: The Buried Story of America's Largest Slave Rebellion and the Man Who Led It - eBook.
Back
×
Back
×