Skip to main content
The Delusion of Disbelief: Why the New Atheism is a Threat to Your Life, Liberty, and Pursuit of Happiness - eBook
By: David Aikman
Stock No: WW83151EB 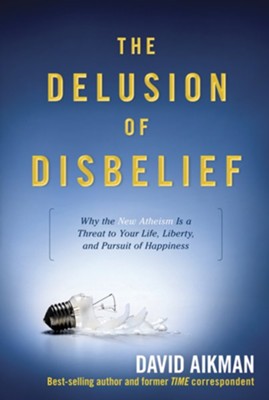 The Delusion of Disbelief: Why the New Atheism is a Threat to Your Life, Liberty, and Pursuit of Happiness - eBook

▼▲
Since the beginning of time, enemies of faith have attacked the existence of God. But the attacks on faith now not only attack that belief, but actually seek to brand Christianity as dangerous. In The Delusion of Disbelief David Aikman has created a resource to help you understand and counteract the increasingly antagonistic attacks on faith.

▼▲
Journalist and biographer Aikman offers a spiritedly unsympathetic review of the new atheism represented by Daniel Dennett (Breaking the Spell), Richard Dawkins (The God Delusion), Sam Harris (Letter to a Christian Nation), and Christopher Hitchens (God Is Not Great). As might be expected from any one author simultaneously engaging four opponents, Aikman struggles at times amid a flurry of arguments and counterarguments. Still, many of his criticisms score on their targets. Aikman reads the new atheists in historical perspective as the heirs of Voltaire, Marx, Feuerbach and Mencken, as well as in their immediate setting of post-9/11 fears of religious extremism and discontent with the Bush administration and its perceived evangelical leanings. While not an expert on all the issues the new atheists raisechapters on science and biblical criticism rely heavily on arguments made by other reviewersAikman speaks effectively to the interplay between religious belief (or disbelief) and politics, whether among the American founders or in contemporary North Korea. But after criticizing the new atheists' inflammatory rhetoric, Aikman does not always rise to a higher level himself: references to Harris's drug use and Hitchens's communist past and drinking habits become gratuitous. (Apr.) Copyright 2008 Reed Business Information.

▼▲
I'm the author/artist and I want to review The Delusion of Disbelief: Why the New Atheism is a Threat to Your Life, Liberty, and Pursuit of Happiness - eBook.
Back
Back