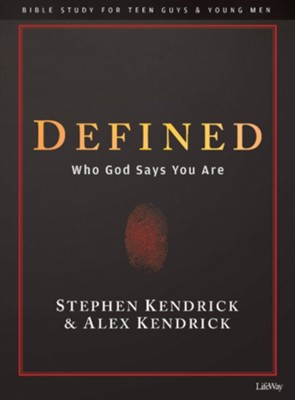 This 8-session Bible Study for teen guys and young men, Defined: Who God Says You Are, examines spiritual truths from the Book of Ephesians in order to lead young men into a closer relationship with God and a better understanding and appreciation of their God-given identity – which is fulfilled in Christ.

From their schools and homes to the apps on their phones, young men can easily get lost and confused when trying to answer the question, "Who Am I?" Once they begin to understand who God is and that they were created in his image, their identity in Christ will come into greater focus.

Designed to be used in conjunction with the video teachings found on the DVD in the Defined Leader Kit.

▼▲
Alex Kendrick is an ordained minister and New York Times bestselling coauthor of The Love Dare, The Resolution for Men, and The Battle Plan for Prayer. He has spoken in numerous countries to students, families, and men’s groups. He is also an accomplished actor, screenwriter, and film director, whose credits include Facing the Giants, Fireproof, Courageous, and War Room. He and his wife, Christina, have six children.

Stephen Kendrick is an ordained minister who has served families for 20 years in student ministry and associate pastor positions. Along with his brother Alex, he is also a screenwriter (Facing the Giants, Fireproof, Courageous, and War Room), movie producer, and coauthor of three New York Times bestselling books (The Love Dare, The Resolution for Men, and The Battle Plan for Prayer). Stephen and his wife, Jill, have six children.

When you introduce yourself to someone for the first time, you may start with your name, where you go to school, a sport or instrument you play, or your future plans. Each of those may help our culture define us, but are they enough? There are bigger questions culture can’t answer: “Who am I?” and “Why do I matter?” But first, you must answer, “Who is God?”

Scripture teaches that we’re all made in the image of God. We don’t define ourselves—the Creator does. Once you begin to understand who God is and what it means to be created in His image, you’ll begin to discover all God has called you to be. This Bible study will examine spiritual truths from the Book of Ephesians to lead you into a closer relationship with God and a better understanding and appreciation of your God-given identity—which is fulfilled in Christ.

Defined Teen Guys’ Bible Study Book includes content for eight sessions, personal study between group sessions, applicable Scripture, "How to Use this Study," tips for leading a group, and a leader guide.
Session topics:
1 – Uniquely Created
2 – Broken by Sin
3 – Transformed
4 – Who You Are
5 – What You Have
6 – Living Out Your Identity
7 – Walking In the Spirit
8 – Walking On Mission

▼▲
I'm the author/artist and I want to review Defined, Teen Guys' Bible Study Book.
Back
Back